Despite being a Chelsea legend, Frank Lampard has been endearing himself to Manchester City fans since his move to the Etihad Stadium in the summer.

The former England star won a legion of new supporters by scoring against his beloved Blues during the 1-1 draw at the Etihad last month.

And Lampard is sure to gain a whole host more by taking part in a wheelchair football coaching session for children as part of City’s laudable community programme.

The 36-year-old midfielder met several City fans among the group of kids and got heavily involved in the class, sitting in a wheelchair to play with the group.

Lampard said: ‘It’s been a real privilege to see first-hand one of the invaluable programmes City in the Community is delivering in Manchester.

‘Seeing the smiles on the faces of the young people is a true testament to the impact they are having.’

The ‘One City’ initiative, funded with help from the Premier League and BT Sport’s The Supporters Club, aims to work with 1,000 young people with disabilities, providing them with free access to football provision.

Lampard also took part in a special documentary on the work of City in the community for BT Sport. 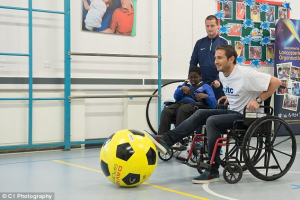