Manchester United have hired the world’s first wheelchair-bound (sic) football coach – who fancies himself as the next Sir Alex Ferguson.

Sohail Rehman, from Keighley in Yorkshire, became the first ever wheelchair trainer to coach able-bodied (sic) footballers last year after gaining his badges. And after a stint working in Sunday league football, United have now snapped him up to work with their young players of the future. Stars such as David Beckham, Ryan Giggs and Paul Scholes have all graduated through the ranks at Old Trafford, and now 22-year-old Sohail will now use his skills to help find the next big superstar.

He’s not stopping there though, having told the local media that he is hoping to secure a top managerial job in the future – with Fergie said to be a role model. 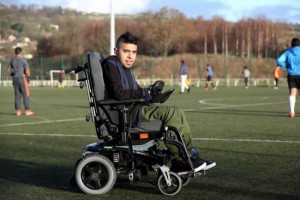