Manchester United partnered with Manchester United Disabled Supporters Association (MUDSA) to celebrate the Weeks of Action ‘Game Changers’ with a range of matchday activities and promotions.

In the run up to Weeks of Action, MUDSA made a generous donation towards Level Playing Field #GameChangers t-shirts which were on display throughout Old Trafford at United’s home fixture with Bournemouth.

Ball assistants were kitted out in the t-shirts as well as club staff and stewards who were on hand in the accessible seating areas creating an interest in Weeks of Action and the works of Level Playing Field.

As the teams came out on to pitch, they were led out by club mascot Fred the Red with LPF pennant, and ‘Fred’ later went on to meet and pose for photographs with young disabled supporters.

We were also delighted that ex-United midfielder, club ambassador and Premier League winner Quinton Fortune got behind the campaign. (pictured)

LPF General Manager, Ruth Hopkins said, ‘We were delighted that Manchester United once again supported our Weeks of Action campaign. With one of the largest clubs in world football showing a commitment to access and inclusion, we hope this can inspire others to be ‘Game Changers’ and improve accessibility for all disabled fans.’ ‘We also would like to thank MUDSA for their generous donation towards LPF t-shirts.’ 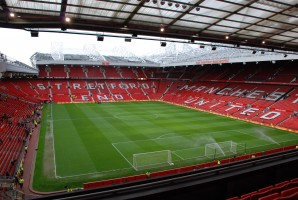