Manchester United celebrated Weeks of Action with promotional activities held at Old Trafford for their home games against Everton and Aston Villa.

Before Weeks of Action began we reported on the club generously donating LPF Week of Action banners to each Premier League & Championship club, with United displaying their banner above Old Trafford’s wheelchair user area of the stadium (pictured).

The club’s ball boys & girls paraded a banner around the pitch before both games as the players warmed up, and wore t-shirts promoting Weeks of Action during their win against Aston Villa. The campaign was also featured in the matchday programme, with a summary of the accessible facilities the club provide and showing support for Weeks of Action 2016.

Level Playing Field wish to thank Manchester United for their amazing support throughout Weeks of Action 2016. 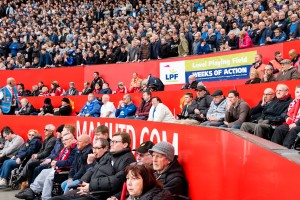