A lifelong Manchester United fan has taken his three sons, one of whom is disabled, to watch Stockport County after being told that it was not possible for his family to be seated together at Old Trafford.

Martin Emery believes that the access at United for wheelchair users is discriminatory and was furious to receive an email from the club’s disability liaison officer that said: “There are some clubs that would welcome you with open arms and possibly ask you to bring as many family members as possible, the downside is it wouldn’t be at Old Trafford, most probably Rochdale, Oldham or Stockport. They have the space and that’s the critical thing.”

United stress that the email simply referred to the relative space constraints at Old Trafford that meant they could not seat Martin’s disabled son, Jordan, 18, with his two younger brothers Ethan and Zac, who are both Manchester United members.

“I was told that only one carer was allowed to accompany each wheelchair user in the disabled section,” explained Martin. “I can’t sit in two places at once. I thought there may be some solution but they just don’t seem interested. Jordan doesn’t speak but he likes watching football and would love to go with the younger boys.”

The wider issue at Old Trafford is of only 120 spaces for wheelchair users, despite the charity Level Playing Field recommending at least 282 for a ground with a 75,635 capacity. The allocation of these tickets is also controversial, with United largely providing the spaces free of charge on a match-by-match basis.

Wheelchair users have found that they cannot buy a season ticket although Manchester United say that there is an unspecified number of disabled season ticket holders. Like other clubs, United point to the age of their stadium for the constraints on numbers even though it has been significantly renovated and expanded in the past decade.

“Theatres, cinemas, concert venues were using this excuse 20 years ago,” said Emery. “When the clubs had to become all-seater, they did it within a matter of weeks. Not one said it was impossible. A wheelchair space takes up more regular seats. It’s about money, isn’t it?”

Baroness Tanni Grey-Thompson has also said that she is against the idea of giving wheelchair users free seating because it could make the fan feel like they are not entitled to complain.

A Manchester United spokesman said that the club were working “proactively” with the Premier League to accommodate more disabled supporters. Of Martin Emery’s complaint, the spokesman said: “The club received a request for a family of four including one wheelchair user and a carer to sit together at a game. We advised that, due to the current configuration of our stadium and in line with stadium safety protocols, we were not able to facilitate that.

“We suggested an alternative with the father (as primary carer) and his son to be situated on the wheelchair viewing platform and for the two other children to be accompanied by an adult in the seating area just to the front of the platform, subject to those seats being available.”

Story reproduced from The Telegraph 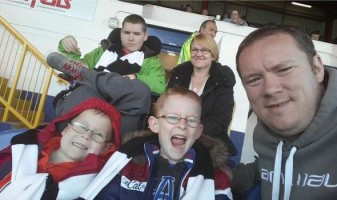