Martin Emery has won the Social Justice Award in the SMK Campaigner Awards 2016 for his United Discriminate campaign which has helped lead to improvements made to accessibility at Old Trafford, home of Manchester United.

During the 2015/16 season Old Trafford has seen the introduction of a family area to accommodate wheelchair users and their families, as well as the installation of a Changing Places toilet facility – one of only 3 Premier League stadiums to have one.

Martin, a lifelong Manchester United fan was motivated to begin his campaign when he was told that he would be unable to sit together with his 3 sons, one of whom, Jordon, is a wheelchair user as there was only space for one personal assistant. The campaign secured the support of key Parliamentarians and leading disability charities such as Scope. Martin has also become a good friend of both Level Playing Field and CAFE.

Many congratulations on your award Martin! 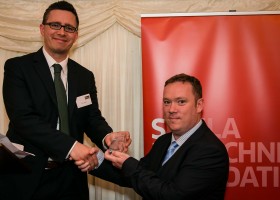