Grimsby Town and Lincoln City mascots set for epic journey to visit 92 football grounds in 92 hours for Demi Knight. They plan to be at Huish Park on 10th October at 12:40pm. Join them with the Jolly Green Giant.

The Mighty Mariner and Poacher the Imp will be travelling to each Premier League and EFL ground along with James Whaley, who has raised over £10,000 for Demi Knight.

The Mighty Mariner and the Lincoln City mascot will be hitting the road in an epic attempt to raise money for poorly Demi Knight by visiting 92 football grounds in 92 hours.

Andy Carr, the Grimsby Town mascot, and Edward Brett, better known as Poacher the Imp, will be joined by James Whaley, who recently biked between the two clubs’ stadiums.

They hope to raise at least £10,000 for the young Louth girl who is undergoing cancer treatment, in addition to the £10,000 raised by James’ recent bike ride which united supporters from both clubs.  He was planning on taking a break from fundraising after it, but couldn’t turn down this opportunity.

James said: “As soon as Poacher suggested the idea, I was up for it, and we quickly got the Mighty Mariner involved. We are still working out the logistics of how and when to do it, but it’s really exciting.

“Since I’ve started fundraising for Demi, I have made some sacrifices, but it’s the least I can do. It’s all been completely worthwhile.

“My biggest message to people is we’re not asking you to donate £50 to our cause – we’re only asking for £1 to help support Demi.”

They will have four days to travel to every stadium in the Premier League, Championship, League 1 and League 2.

The journey is planned for October 8 to 11, and the JustGiving fundraising page is now open.

Andy, who entertains thousands as the Mighty Mariner, said: “When I met Demi and her family, they had my heart instantly. If I was ever in a situation like that, I would hope people would help me like we’re trying to help Demi.”

“If we can do our bit and raise money in a fun way that will get people interested, I will be happy. We’re hoping that it will capture the imagination of a lot of football fans.

“Within hours of us announcing it, people were already donating money.”

The team are trying to get other clubs from around the country involved as they visit the many grounds, and the mascots are hoping to meet many of their counterparts.

The group is appealing for help with their trip, including a motorhome to make the journey easier and contributions for the fuel it will take to criss-cross the country.

James recently biked the 45 miles from Lincoln’s Sincil Bank ground to the Mariners’ Blundell Park, along with supporters from both clubs.

Demi’s condition appears to be improving following experimental treatment in America. She was diagnosed with cancer for the second time earlier this year, but recent MRI scans have given the family hope.

However, they still have to contend with huge bills for her ongoing treatment. It is costing her family £500 to regularly fetch medication from Poland and Texas, which is putting a huge strain on their finances.

(This article was first published by the The Grimsby Telegraph on 31 August 2018 and you can see a video message from Demi in their article here.)

A spokesperson from Level Playing Field said “It’s great to see both club mascots support Demi for this important cause. The sacrifice that both have made to take on this challenge is inspiring, and we wish them well on their gruelling journey ahead.” 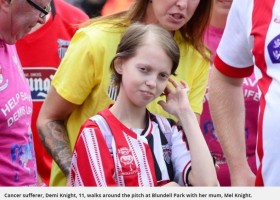