Level Playing Field are pleased to support Mental Health Awareness week 2017, a campaign run by the Mental Health Foundation with a theme of ‘surviving or thriving’.

You can discover more about the campaign here.

Mental ill health is the most common form of disability, with 1 in every 4 people affected by this at some stage during their lifetime.

Mental ill health can take many forms, including depression, anxiety, bipolar disorder, panic attacks, post-traumatic stress disorder and many more. It does not discriminate, and can affect people of all ages, races, backgrounds and lifestyles.

Ex England international footballer Paul Gascoigne spoke about his experience of having mental health issues since retiring from the game, and encouraged more people to speak up about their mental health whislt also referencing Everton winger Aaron Lennon, who has recently sectioned under the mental health act.

Gascoigne said: “You look at the Everton player who has just been sectioned. There are a lot of people who have got everything, but inside they don’t share enough. There needs to be more done. It is a macho thing; they think ‘I’m not doing this because no one will like us’.”

Ex England international cricketer Andrew Flintoff also spoke openly about his mental health issues and how he prefers to not speak about them as a stigma, but rather something that is a part of him.

Flintoff said: “It’s a piece of me, but does not define me’.

Former Welsh international midfielder Robbie Savage, now working in the media industry, spoke to BBC Radio 5 Live about the loss of his father. Colin Savage was diagnosed with Pick’s disease, a rare form of dementia, that ultimately led to his death at the age of 63.

Savage said, “I remember I was in the hospital with him and football came on the TV. He looked at the TV, and he looked at me, and it brought a little smile to his face. Somewhere in there, I knew he knew where he was at that moment.”

Lastly, an essential read on the powers of sport, and how simply supporting a football team can change lives. Here Stephen Tudor, a lifelong Manchester City fan blogs on how supporting his team helped him defeat his depression.

Essential read: How Manchester City and football saved me from depression

It’s good to talk, if you or someone close to you experience mental health issues then the below links may be of use: 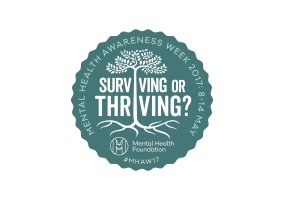