Middlesbrough improve disabled facilities for away fans at the Riverside Stadium

A new raised platform and lift have been installed at Middlesbrough in an effort to improve the experience for disabled away fans visiting the Riverside Stadium.

After the away supporters section was moved to a different part of the stadium last season, Chair of the club’s Disabled Supporters Association, Paddy Cronesberry, was concerned about the space and location of facilities for disabled away fans. Paddy worked closely with the club and local steel fabricators and lift specialists to deliver the improvements, which means that disabled away fans are now located with their fellow supporters, with excellent views of the pitch as well as protection from the elements.

Paddy told LPF that he was “absolutely delighted to see the club continue to be proactive in responding to the needs of disabled supporters, be they home or away fans. I would like to thank all those involved with this project; it is a facility that Middlesbrough FC can be very proud of and sets the standard for other clubs around the country”. “I’m sure it will be enjoyed by all our users in the Championship, and by the Premier League visitors when we receive them”, he added as promotion chasing ‘Boro currently sit 2nd in the Championship table.

The new developments were officially opened on Saturday 27th September as Middlesbrough hosted Leeds United, with Paddy being joined by Level Playing Field Secretary Tony Taylor, Secretary of Leeds United Disabled Organisation (LUDO), Andy Brown, and club legends Alan Peacock and Eddie Gray. In the end the travelling supporters were left disappointed after a 3-0 victory for Middlesbrough, but disabled fans had first class views of the action throughout due to the efforts of all involved to make the Riverside a more inclusive, accessible stadium.

Tony Taylor was impressed with what he saw and said, “This is an example of the changes that can and should be made by other clubs. The view from the platform is superb. Not only that, to be co-located with your own fans means the match day experience is that much better. Once again, Paddy’s persistence and the good relationship between the Middlesbrough DSA and the football club have produced dividends”.

For more information about Middlesbrough FC and the Riverside Stadium, visit the LPF stadium page here 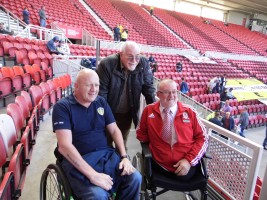