The club decided to support this year’s Weeks of Action as a part of their Ability Counts Matchday against Doncaster FC.

There was a wide range of activities and activation taking place which started in the week leading up to the match. On Thursday the 12th the Club, along with their Community Trust (MK Dons SET), and their Supporters Association (MKDSA), ran disability consultation evenings and tours. The tours were open for all and allowed existing disabled fan and potential disabled fans to comfortably experience the behind the scenes sides of the stadium and club.

The pinnacle of the tour was an intimate Q and A in the changing room with Club CEO Andy Cullen, Manager Dan Micciche & Player Alex Gilbey where fans could ask any question relating to matchday experience, access and managerial tactics!

Ahead of kick off the club and MKDSA officially launched their new Changing Places toilet. Kieron Norton (MK Dons Season ticket holder) and his family were the guests of honour along with the Mayor of Milton Keynes. The family travel 2hrs each way to support MK Dons and spoke of how important this facility was for not only Kieron but for the whole family. You can learn more about their Changing Places facility on the MKDSA website here and MK Dons website here.

At half time the club hosted a parade in celebration of their Ability Counts Matchday and Level Playing Field’s Weeks of Action. There were over 350 people involved in the parade which was a huge success.

Owain Davies, Chief Executive at Level Playing Field said: “I was lucky enough to witness and take part in all the activities that MK Dons had put on, from the tour on Thursday night to the Ability Counts tournament and the matchday. The passion and commitment towards access and inclusion within the club is far reaching from top down and the bottom up. It was epitomised by the opening of the Changing Places toilet where the Club, MKDSA and the local community all got involved to raise money and actually build the facility. The vision and passion of the club and its supporters has allowed the stadium to not be only welcoming and accessible but equally to provide a great experience for disabled fans. The club continue to push the boundaries of great access and should be commended in what they do.”

You can see a montage of the day here. 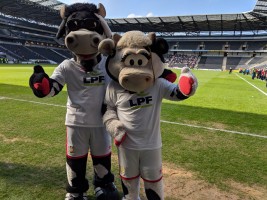