Access to the Jubilee line will take a step forward this month when ramps are installed at Stanmore, Wembley Park and Kilburn stations. It’s the first time that a manual boarding ramp that bridges a gap where the train is lower than the platform has been used in the UK.

TfL has said that following the introduction of the ramps at Kilburn, Stanmore and Wembley Park in June, the ramps will be rolled out to more stations over the summer, increasing Underground access to mobility impaired passengers in other parts of London. We estimate there are around 40 stations that remain on the Underground where a gap or step prevents some wheelchair users from boarding or disembarking.

The move follows campaigning by Transport for All members, angered when a ramp in use at Kilburn station during the 2012 Games was removed. Jeff Harvey of the Brent Transport Action Group, who used to use Kilburn station to travel to college classes, made a video letter that he sent to the Mayor, asking that the ramp be returned.

TfL engineers and access specialists worked with disabled passengers to develop a downward ramp that would be approved by both the Department for Transport and the Office of Rail Regulation.

Earlier this year, several TfA members, including scooter and wheelchair users, tested the ramps. Jeff said: “This will cut some of my journeys down by over an hour, which can make the difference between being able to attend an event, class or job interview, or having to say no. I am very happy to hear the new ramps will make Kilburn Station and others accessible to me and other wheelchair users, finally opening up parts of the Underground network for us to use.”

“It is encouraging that Transport for All and our members were able to interact with TfL during planning and even participate in testing the new ramps. I hope such involvement continues so that all remaining stations where a gap prevents people boarding the train can benefit from a ramp.”

Isabel Dedring, Deputy Mayor for Transport said: “We’ve been determined to create a ramp which works at those tricky stations where there is a gap and step down from platform to train. This innovative new design is a UK first and will make a real contribution to boosting accessibility – opening up more Tube stations to more people. “This is just one of the measures we’re carrying out to make getting around London easier for everyone – including more step-free stations, raised platform sections, new low-floor trains with the latest accessibility standards and much more.”

Gareth Powell, London Underground’s Director of Strategy & Service Development said: “We’ve been using ramps to bridge the gap between platform and train since 2012, but disabled customers at some stations have missed out because traditional ramps were not designed for the unique set up at some of our stations, where there is a gap and step down from platform to train. These new ramps will mean new travel options and better, more accessible journeys, for our customers.”

Article originally appeared on the Transport for All website. 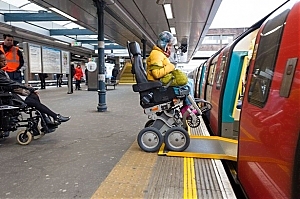