Newcastle United player Siem de Jong made a young blind fans day by inviting him behind the scenes at St James Park on a matchday.

Sem de Jong, namesake of his favourite player travelled all the way from Eindhoven in the Netherlands to attend the Magpies recent Premier League game against Leicester City. Sem first met his hero when Siem de Jong was playing for Ajax in the Dutch Eredivisie, and the pair have kept in contact ever since.

Sem was delighted to be invited to travel to Tyneside to meet his idol along with his family, where he experienced the drama of the Premier League and was presented with Siem’s matchday shirt after the game. Despite Newcastle losing 3-0, Siem de Jong made a substitue appearance from the bench which made Sem’s day.

Full story from the Evening Chronicle 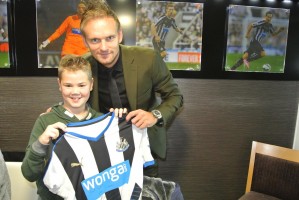