Project Coordinator Kieran Reynolds said, “I would like to thank Newport County AFC and Newport County AFC DSA for hosting the event. Three of the DSAs represented were established during the Working Together project and it was great to be able to build on those relationships and establish a regional forum in Wales. It was pleasing to see clubs and DSAs came together in one room to network and share and best practice”.

LPF General Manager, Ruth Hopkins said, “I was delighted to be invited to speak at the first Welsh DSA Forum about Level Playing Field. Thank you to Kieran and Colin for all their hard work in making this happen and to Newport AFC for hosting the event. I wish the Welsh Forum every success for the future”

Newport County AFC DSA Chair Colin Faulkner said “It was an honour to be able to host the inaugural Welsh Forum for Disabled Football Fans on behalf of the club; it is evidence of the importance that Newport County AFC’s Board is committed to improving the matchday experience for disabled supporters.  As the largest minority attending football it is imperative that we move forward not in just making facilities available but in raising awareness of disability and removing ignorance.  Welsh Clubs and DSA’s are some of the most proactive in this area and sharing our ideas and experiences with clubs across the principality will be priceless for the movement”

A summary of the forum can be found here. 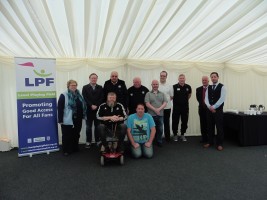