Newport County FC used their 2017-18 season kit launch to celebrate the club ‘family’ by including disabled fan Paul Olander as well as DSA member Rob Taylor in the promotions.

People from all branches of the club were invited to take part in the unveiling of the kit as the County looked to build on the first of its three principles: Unity.

Paul Olander has been a County fan for over 40 years and was nominated to take part in the photoshoot by the DSA’s chairman, Colin Faulkner.  Colin said Paul ‘epitomises what the DSA are striving to achieve; supporting fans with all sorts of disability to attend games.’

Colin said: “A County fan for 40 years, Paul had stop going to games after a stroke but he met with the DSA and now has a season ticket with his wife Tina as a free assistant.”

Currently undergoing a re-brand to represent the One Club One County theme, the DSA are an important part in achieving the Club’s hope to make League Two football accessible and enjoyable for everyone.

The We Wear the Same Shirt project was set up by Time to Change Wales and the FAW to help people with a mental or physical disability enjoy team sports. Newport County AFC’s County in the Community joined the scheme to provide disabled people an opportunity to enjoy playing football in a relaxed, stress-free environment.

Rob Taylor – who is also a key figure of the amber army and is the one in-charge of playing the drum on a match day – has become a regular figure in the We Wear the Same Shirt side since joining the team and he believes it is vital to have these projects associated with the club. 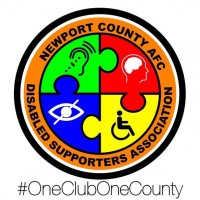