Newport County focussed their Weeks of Action activities on raising awareness of mental ill health with a range of promotional events and activities.

1 in 4 of the population will have mental ill health in their lifetime and sport is well known to help reduce this number whether through participation or as a spectator – simply going to a football match can be a ‘Game Changer’ for supporters who have mental ill health. During Weeks of Action the club has been highlighting the work of their community team and the participation events they run weekly which promote the health benefits of being active for supporters.

On matchday, the club worked in partnership with Newport County Disabled Supporters Association, organising information points around the stadium with information about mental ill health from Time to Change Wales and Alzheimers Newport, encouraging people to talk and be open about their mental health.

Prior to the match, the club also screened a video message from the club’s players encouraging fans to talk about mental ill health which you can watch here.

Their activities concluded with the matchday ball assistants displaying a Level Playing Field Weeks of Action banner as both teams came out on to the pitch, as Newport County rounded of their celebration of the #GameChangers of access and inclusion. 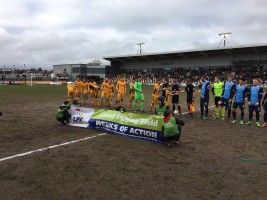