On Saturday 10th January Noah Cunningham realised a boyhood dream by leading his beloved Everton team out as mascot for their home game against Manchester City at Goodison Park.

Noah was nominated by hundreds of fans on twitter to be selected as mascot for the game, and as well as leading the teams out on to the pitch before kick off, he met Everton stars such as Kevin Mirallas, Gareth Barry and Ross Barkley and had a shirt with his name on hung up in the first team dressing room.

Noah is 10 years old and has Duchenne Muscular Dystrophy. He currently plays for Everton’s powerchair team, and has also recently been given a life changing handsfree phone that he can operate with his eyes.

Level Playing Field hope Noah had a fantastic day out and enjoyed the game! 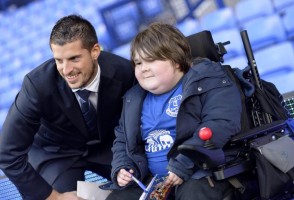