This Saturday 13th October football supporters will be out in force for Non-League Day, the annual event that celebrates the semi-professional and grassroots game, which returns for its 9th consecutive season.
Football

The event, planned every year to coincide with a break in the Premier League and Championship calendar, is a fantastic opportunity for fans to get out and watch their local team and we are encouraging disabled fans to go and watch their Non-League team this Saturday.

At LPF we are passionate about Non-League football and regularly feature stories about the great work being done by Non-League clubs in England and Wales.

We’d love to hear from you about your Non-League Day experience, and encourage you to tweet us @lpftweets, or by leaving a fan comment on our club pages which can be found under the ‘Clubs / Venues’ tab. If there isn’t a club page for the team you went to see, you can email us at info@levelplayingfield.org.uk.

Mike is an Everton season ticket holder and a Prescot Cables shareholder:

“Going back a few years, I couldn’t have even told you where Prescot Cables played their home matches. Then, during one international break, everything changed. My friends and I attended every Everton match at the time, home and away, and basically needed an excuse to meet up during the international weekend. A group of six of us, Everton and Liverpool fans, ended up at a Prescot Cables away match and I was pretty much hooked from then on.

Over time my interest and passion for the club only grew. I used to squeeze in attending Cables games whenever Everton weren’t playing, but now it’s definitely the other way round. It’s given me my love for football back to be honest. At times, following a top-flight side can feel like a bit of a chore, and you always see the same places, watch the same players and visit the same stadiums. With Cables, every match is completely different. We’ve become really good friends with the staff and most of the squad, and we’ve also become shareholders of the club so we’ve got an even greater passion for the place.

Matchday isn’t just about wanting the players to win any more – it’s cheering on your mates to play well. It just means more at this level.”

b. Do you travel away with the Cables?

“I go to most Cables matches, both home and away. Over the last few years I’ve been all over the place supporting them. At our level, the leagues are regionalised but I’ve still been as far as South Shields and Scarborough to watch Cables games – a good few hours by coach. We even have a European away day (of sorts) with Welsh side Colwyn Bay playing in our league. I’d most likely have never travelled to the likes of Glossop, Tadcaster and New Mills were it not for Cables, and I’ve had some unbelievable days out to these places. The people you meet at away games at this level also help to make the trip special – it’s always a really unique experience that just can’t be replicated further up the league ladder.”

c. Are Prescot Cables doing anything this year to support Non-League Day?

“Originally we didn’t have a game scheduled for Non-League Day, but after winning a replay last week against Sheffield FC (the world’s oldest football club) we now have an FA Trophy match against Kendal Town. We played away at Kendal recently and won 3-0, so fingers crossed for another big win. It should be a brilliant game and we’re hopeful of crowds of up to 500 for the match, with both Everton and Liverpool not playing. That would be a massive achievement for the club – it wasn’t long ago we used to have attendances of less than 100 fans so to see how far we have come is amazing. We’re hoping for a big crowd and an even bigger win to carry on our road to Wembley!”

d. Anything else you’d like to say in support on Non-League football.

“If you’ve never been to a non-league game before, I’d encourage anyone just to give it a try and you will not regret it. Non-League Day is the perfect opportunity to do it too. Until my first match, I had no idea what I was missing out on.

Cables has become an extended family now and I’ve met some of my closest friends through the club. It’s also made me fall back in love with the beautiful game, and helped me to rediscover the real joy of watching your team play. I just love everything about the club.”

Amy is a wheelchair user and has been following Prescot Cables for a couple of seasons. In that time the club have made several changes that have improved her match day experience. These include fitting a RADAR lock to the accessible toilet door, identifying the wheelchair user viewing area and putting up signage to help prevent people standing in front. The club are now in the process of writing a detailed access guide to help home and visiting fans plan their match day visit.

Ruth Hopkins, General Manager of Level Playing Field said, “We recognise how many disabled people regularly support Non-League football and the potential for many clubs to attract more disabled fans. We value our relationship with the National League and we are keen to support and advise all clubs where we can. There are a lot of low cost and no cost adjustments that can be made that help make clubs more accessible. We send our best wishes to everyone involved in Non-League Day 2018 and hope they can build on the success of previous years”

There are events happening at Non-League grounds all over the country this weekend. Here are just a few:
• A penalty shoot -out at half time at North Ferriby United
• Free entry for all public sector workers at Alsager Town
• Food Bank collection at Ossett United
• “Pay What You Like” at Margate FC with 50% donated to Anthony Nolan Charity
• Free Gingerbread for all and half price admission for all PL and EFL season ticket holders at Grantham Town
• Dads and Lads Penalty Competition at Boreham Wood
• Half Price entry for fancy dress and League season ticket holders at Billericay Town
• Pay What You Want and free chips! At AFC Rushden and Diamonds

Please support your local non-league club and help make this year’s event the best ever! 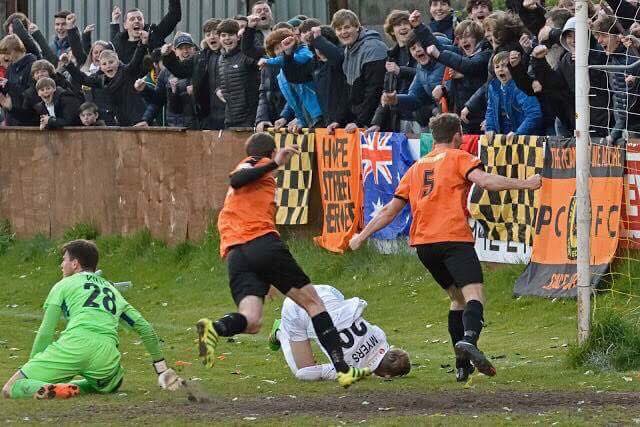