Saturday 13th December was a day to remember for Paddy Cronesberry MBE as he watched his beloved Middlesbrough run out 2-0 winners against Derby County and was also presented with Level Playng Field’s Joseph Wratten Award by secretary Tony Taylor.

Paddy, a diehard Boro fan who travels to home and away matches is a founder member of the MDSA and through this has helped many disabled supporters attend matches where they may not have been able to before. Paddy has also been awarded an MBE for for his services to disabled people in sport, and took part in the Olympic torch relay for London 2012 making him a very worthy winner of the award.

Level Playing Field secretary Tony Taylor presented Paddy with his award on the pitch at the Riverside Stadium and said the following about the Paddy and his award:

It is given in recognition of those who who act as advocates for social inclusion and equality for sports fans, pushing boundaries as well as highlighting the possibilities for disabled fans.

Paddy was unaware that he was to receive this award which was presented to him on the pitch at the end of today’s match which saw the home side win 2-0, moving in to pole position in the table. All in all, a great day for Paddy and for Middlesbrough who can be proud of his dedication.’ 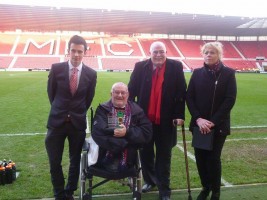