Philippe Coutinho was named Player of the Season by the Liverpool Disabled Supporters Association (LDSA) at their gala dinner at Anfield on Thursday evening the 14th May. After a ballot by members of the LDSA, the Brazil international was overwhelmingly voted as the Reds’ star player for the 2014-15 campaign. Coutinho, who received his award from long standing member Jenny Windsor was delighted to be the recipient of the award, commenting: “It’s very flattering to have been voted as player of the season by LDSA members and this is an extremely proud moment for me. “To be recognised in this manner is a huge honour and I would like to thank all the supporters who voted for me.” The 22-year-old spent more than an hour greeting supporters, signing Liverpool memorabilia and posing for photographs with excited LDSA members. Liverpool legend and club ambassador Robbie Fowler was also in attendance at the dinner to accept his new position as the president of the LDSA also from Jenny, taking over from ex-Reds manager Roy Evans. Fowler said: “I’m honoured to have been made president of the LDSA. It is a real privilege to have been asked to take on this role and very humbling from such an important group of supporters.  “It was a fantastic evening at Anfield and I look forward to working with the LDSA.” The evening, which was attended by more than 180 LDSA members, also included a three-course meal, a charity raffle packed with signed LFC memorabilia, and a live band.  Keith Graham, LDSA chairman, added: “We were delighted to have Philippe Coutinho in attendance to accept his award and the night is one that I’m sure our members will remember for a long time. “Philippe was brilliant interacting with the supporters and is a worthy winner of the award for the 2014-15 season.” 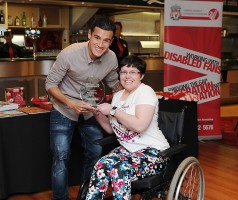