Premier League clubs have been accused of “disgracefully” betraying their disabled fans after it was revealed that almost a third are expected to renege on a collective promise to provide the minimum recommended access for wheelchairs.

Despite being secured a windfall from television deals over the next three years of £8.3 billion, some of the richest clubs in world football – including Chelsea and Liverpool – appear already to have accepted that they will not meet a pledge that was made last year.

The Equality and Human Rights Commission has renewed its threat of legal action and remains adamant that not meeting these guidelines – which were agreed by Premier League clubs as far back as 1998 – would be a breach of the 2010 Equality Act. Just three out of the 20 Premier League clubs currently meet or exceed the recommendations and yet it is estimated that the changes could be made for as little as £7.2 million.

According to expert architect assessments, even the most expensive and comprehensive solutions would cost a combined £28.7 million. Premier League clubs spent £1.165 billion on players during the summer transfer window.

No. Only 10 places are on raised platforms and the rest are pitchside and not easy access

Yes. Arsenal intend to raise their wheelchair spaces to beyond 250

TBC. Working towards being compliant within 12 months. Promoted clubs have been given until 2018

No. Club only say they will meet minimum standards if and when they build new stadium

Palace dispute the 38% figure but have not provided an alternative. They say they are working towards meeting pledge

Yes. Club says they have commissioned work to meet the pledge

No. Despite expansion and increased hospitality, phase 1 of Anfield rebuild did not meet guidelines

Yes. Middlesbrough say they have 221 potential spaces for wheelchair users if they include those at pitchside

Yes. The club are confident of getting their numbers up in time for the deadline.

Yes. Club will move to Wembley in 2017 and new stadium should meet guidelines

Yes, Club say they have a plan and will meet pledge

Yes. Club are working towards target and confident of meeting it

TBC. Club say numbers are already met but disputed by Level Playing Field, who say they include flexible seating in hospitality that can be used for general admission

Chelsea currently provide only half of the recommended wheelchair space at Stamford Bridge and, despite last year’s pledge, now only say they can meet minimum numbers when they rebuild their stadium. There is no timescale or even yet planning permission for that project.

Liverpool have just proudly opened their new Main Stand but, for all the extra hospitality space, say that the guidelines for wheelchair use will only be met at stage two of their renovations. There is currently no timescale and only outline planning permission for that part of the project.

Other clubs, including Crystal Palace, Bournemouth and West Ham United are also not now expected by campaigners to meet the pledge, while the three promoted teams have been given until 2018 by the Premier League. There was no mention of additional time for promoted clubs when the promise was first made last year.

“The excuses being put forward by clubs as to why they will not meet this are, frankly, unacceptable,” said Lord Faulkner, a Labour peer. “Liverpool Football Club, for example, seems far more interested in providing general hospitality places than in installing sufficient disabled fans’ seats to comply with football’s own minimum standards. It is law that they [the clubs] are required to provide that accommodation, and it is disgraceful that they have not done so. It is clear that the Premier League appears to have no intention to penalise or sanction clubs that do not meet the pledge.”

A statement had been issued on Sept 10 last year in which a series of provisions were said to have been “agreed by Premier League clubs”. It followed a Telegraph investigation into the issue and the first part of the pledge was for “all clubs to achieve compliance with the Accessible Stadia Guide by August 2017”. This related directly to the number of wheelchair spaces, as well as other provisions to improve the experience at football of disabled people.

“We are now at half-time, and for many teams, the performance is simply unacceptable,” said Lord Chris Holmes, a Conservative peer and the EHRC disability commissioner. “There are clear sanctions in the Equality Act which Premier League clubs may find themselves on the end of. We have the richest, the most profitable league on the planet. That has to be the most inclusive league as well otherwise it is morally bankrupt.”

A fresh investigation into the progress of Premier League clubs was conducted by both the charity Level Playing Field and The Telegraph. Leicester City, Manchester City and Swansea City already meet the guidlines. Others, including Everton, Watford and Manchester United remain at less than half of the recommended number, but have renewed their pledge to get the work done by next season. Stoke City, Southampton, Arsenal and West Bromwich Albion also promised to meet the target while Sunderland and Hull City are already close and would need only relatively minor adjustments.

West Ham United, who have inherited a supposedly fully-accessible Olympic Stadium, have been accused of only reaching the target by including flexible seating in hospitality areas that could also be used for general admission. That was described by the Level Playing Field and the EHRC as “one of the most shocking findings” of the research.

“With the Paralympic Games taking place currently in Rio, how can we talk of the positive legacy of London 2012 for disabled people in the UK when even the Olympic Stadium will no longer be fully accessible? It truly beggars belief,” said Joyce Cook, the chair of Level Playing Field.

Lord Holmes believes that the attitude of clubs, who have cited the age of their stadium or planning hurdles, as “symptomatic of a culture in which disabled fans are treated as a nuisance or afterthought”. He also pointed out that “no such issues arise when improvements and extensions to hospitality areas are needed”.

Chelsea claim still to take the issue “very seriously” but say they are constrained by “an old stadium that is restrictive in terms of improving our current accessible seating”.

A spokesman added: “A planning application for a redeveloped ground at Stamford Bridge has been lodged with the local council which, if approved, will see the construction of a new stadium that will exceed the Accessible Stadia guidelines.”

West Ham say that it was a benefit for the wheelchair spaces to be located in different areas, including hospitality, and point to the vast improvement on Upton Park. “Every disabled supporter that has applied to attend a West Ham United match at London Stadium has been allocated one of our accessible seats,” said a spokesman. “All flexible spaces in Club London will never be allocated at the expense of a disabled supporter.”

Chelsea have not specifically said they will not meet the Premier League deadline but it was hard to reach any other conclusion from a statement that again mentioned the age of their stadium and simply restricted their pledge to offering “outstanding, accessible facilities for all visitors to Stamford Bridge” only when it is redeveloped. One problem. The planning application might have gone in but there is currently no timescale on whether a new 60,000 stadium will even win approval from the council, let alone be constructed. What has changed at Chelsea in the year since being part of the Premier League commitment is unknown but it all suggests that wheelchair users must continue to put up with the status quo which, as well as just 108 spaces, includes sightlines which have been strongly criticised. Chelsea’s repeated reference to the difficulties of their stadium will infuriate campaigners. No-one disputes that the work is almost always more difficult and costly at an older ground but the idea that it still constitutes a reason for inaction is roundly dismissed as an “excuse” by campaigners. “If you can make the Cambridge College that I went to accessible, with buildings that date back to the 15th century, it is entirely possible to solve this problem,” said Paralympic swimming champion Lord Chris Holmes. An insider at another Premier League club was also adamant. “Just about anything can be done inside a stadium – and certainly add about 100 spaces for wheelchair users – it just depends if you really want to do it,” he said.

Liverpool: A hole in the new stand

It was one of those great Liverpool occasions at Anfield last week. The new 8,500 seat Main Stand was unveiled and, as the likes of Kenny Dalglish, Jurgen Klopp, Ian Rush and owner John W Henry stood to celebrate the milestone, one serious oversight was forgotten. Liverpool were also missing a golden chance with this £114 million renovation to finally meet the pledge that had been made last year to their disabled fans. And so, amid an expected increase in matchday income to beyond £59 million, they no longer expect to reach minimum guideline for wheelchair space until phase two of the stadium project is complete. The catch here, however, is that there is no timescale for that part of the project in Anfield Road and only outline planning permission. Although the situation has certainly improved upon what was a fairly dreadful previous ratio, there is also some ongoing dispute about the claim now of 193 wheelchair spaces. Level Playing Field believing that 11 per cent of those spaces are in hospitality areas and not permanently dedicated disabled spaces. Liverpool would not comment yesterday but did point to improvements in other disabled facilities in the stadium. Disabled fans at Anfield have previously complained of having their view obstructed. As well as the minimum numbers, all clubs have agreed to appoint a Disability Access Officer and to give urgent attention to wheelchair bays, steward training, websites, ticketing policies and parking. Minimum disabled bays in the away sections of grounds have also been promised by August 2017.

Reproduced from: The Telegraph

Squaka.com: A third of Premier League clubs due to miss deadline for disability access 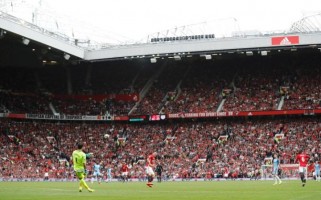