Rafa Benítez was the surprise guest at the Newcastle United Disabled Supporters Association (NUDSA) annual end-of-season party St. James’ Park on Wednesday – dropping in just moments after signing a new contract to stay on as the Club’s manager.

Benítez was at St. James’ Park to sign a new three-year contract and meet assembled media but chose to take time out to mingle with supporters and pose for photographs inside the stadium’s Heroes Club.

Around 100 guests were present at the European Championships-themed event, including NUDSA member and Paralympic hero, Stephen Miller MBE.

And NUDSA chairman Gareth Beard was delighted that the manager chose to pop by, saying: “On behalf of NUDSA, I would just like to thank Rafa for taking time out from his busy schedule to call in to our end of season social after his press conference.

“Everyone got a great surprise and it gave the members a huge lift.”

To find out more about NUDSA, visit the group’s Facebook page here. 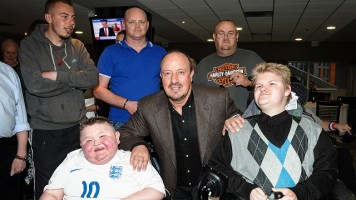