Rotherham United have been praised for providing an excellent audio descriptive commentary service for blind and partially sighted supporters at the New York Stadium, a new service introduced for this season.

Jeff Newall, a Milton Keynes fan who travels to home and away games with his wife Jo, herself a wheelchair user, described the service as “one of the best commentaries” he had had at an away ground. Praising it for its factual and impartial nature, he said it made a “massive difference” to his matchday experience.

Jeff is partially sighted and views the game through a 1cm aperture which can make following the ball difficult at certain times. With this in mind, a good commentary that is up to speed with what is happening on the pitch is essential for Jeff to keep up with the action and relocate the ball when needs be.

Jo Newall commented, “As I have full sight, I like most folk can only guess how difficult it must be for blind and partially sighted people to follow live football but the fact that Jeff is exhausted by the end of the game with the effort required, I think says it all. Those involved in providing headset commentaries are therefore doing a very worthwhile job for those who need these commentaries”

As well as the excellent audio descriptive commentary on offer, Jo and Jeff were also left impressed by the overall accessibility of the stadium including an excellent view of the pitch from the wheelchair user viewing platform where they could sit alongside fellow Milton Keynes Dons fans. They were also impressed with the “friendly and helpful” stewards at the ground with Jo remarking that the New York Stadium is “one of the best stadiums for accessibility” and would go again without hesitation.

Season 2015/16 – How you can engage with Level Playing Field 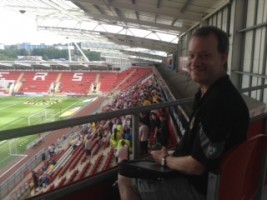