The 2014 Fifa World Cup has been without a doubt one of the most exciting footballing contests to date! Football fans have been witness to some wonderous goals, agonising near misses, shock results and mightily impressive celebratory dance routines!

Morgan Parry, a young disabled football fan from the UK, travelled to Brazil with his father Stephen especially for the tournament. The Centre for Access to Football in Europe (CAFE) and Level Playing Field first met with Morgan and his dad in November 2013 when they visited our offices and we have stayed in close contact ever since. Morgan is studying hard at the moment, focusing on sports management and is determined to find a career within football.

Morgan and Stephen have shared a short blog about their experiences in Brazil below:

“We arrived into Rio de Janeiro on 29th June, staying just 5 minutes away from the FIFA Fan Fest based on the Copacabana Beach. The Fan Fests have got huge big-screen televisions installed, and many hundreds of fans come here to watch the matches and enjoy the FIFA World Cup experience.

We watched four Round of 16 matches at the Copacabana Fan Fest, which included Germany, France and Argentina. Being on the beach, we thought it might be quite difficult to get to the Fan Fest through the sand, but there was an accessible route that went over the beach and worked quite well. We had a great view for the games on the Monday, but when we came back on the Tuesday there was a drinks vendor blocking our view.

Next we flew from Rio de Janeiro to Brasilia, and watched the match between Argentina and Belgium live in the stadium. The atmosphere was terrific, and it was great to be a part of that. We had a really good viewing position inside the stadium, with easy access into the ground. There were priority lanes for wheelchair users so that we could get through the ticket and security checks and into the stadium. There was also a travel buggies system in place to transport people around the stadium.

We really enjoyed the match in Brasilia, and now we have tickets for the Third Place match that will also be played here. This means that we will get to see Brazil play, which should be fantastic.

Brasilia is a really nice, modern city, and is pretty accessible too. There are lots of buses and cars but no metro system, which would have been helpful as everything is so far away from each other! Taxis have been essential for us – we haven’t seen any accessible taxis but Morgan has a wheelchair designed especially for travelling which folds down and fits in most car boots. When we first arrived in Brasilia, we took the phone number of our taxi driver and when we have needed a taxi have called him. It works well for us, though I’m not sure what a powered-wheelchair user would do.

After the Third Place match in Brasilia, we are flying back to Rio de Janeiro in time for the Final. We have been checking the FIFA website constantly for any tickets that might become available, but have had no luck yet. If we don’t manage to get tickets, we will go back to the Fan Fest at the Copacabana and watch the match there, which would also be great. We will then be staying in Rio de Janeiro for a few more days to see the sights and enjoy the city. We are then going to fly to Sao Paulo for a couple of days. We will see some of the tourist attractions there, and I will do a couple of days teaching for the Manchester Business School, before our adventure is over and we fly back home.

We have really enjoyed our time in Brazil so far, and are looking forward to the rest of our trip. It is an amazing experience to be at the FIFA World Cup here, and it has given us many unforgettable memories that will stay with us forever.” 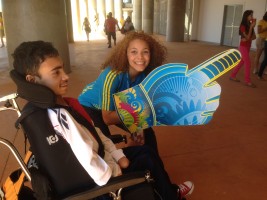