Sunderland AFC have become the first Barclays Premier League club to build a designated sensory room for supporters who are affected by the noise levels of the stadium seating areas. The Nathan Shippey Sensory Room, named after a young supporter who has helped develop the first-of-its-kind project, was constructed in the Black Cats Bar during the summer and is now available for Sunderland supporters. The idea was created after Peter Shippey, Nathan’s father, purchased two season cards in the Black Cats Bar. His son Nathan has an Autism Spectrum Disorder, and after taking his seats for his first game the youngster struggled to deal with the crowd noise, despite trying a number of options already available within the arena. As a life-long Sunderland supporter Peter refused to be deterred and thanks to his vision and dedication alongside his wife Kate and the football club, Nathan and other supporters with sensory difficulties can now enjoy football at the Stadium of Light in a comfortable environment.  “Nathan’s first game was in May 2014 when Sunderland played West Bromwich Albion at the Stadium of Light,” said Peter. “He was desperate to come to a game because he is always watching football on the TV; we felt that it would be a challenge for him but as I said he was desperate to come.””We gave him ear defenders and tried to prepare him in the right way but unfortunately he still struggled with the atmosphere and the noise levels within the main bowl, so we left after an hour and didn’t get to see the end of the game – it was near the end of the 2014-15 season when we survived so I could hear the roars from the crowd when we were walking home.”He continued: “Nathan was still keen to come to games so for the new season we tried the Black Cats Bar because he could come inside and get away from the atmosphere if needed. At the first game of the season the same problem occurred so we decided to contact the club.”

“After speaking to the club we tried a number of areas inside the stadium, including the Black Cats Bar and the upper Premier Concourse. We found that the best place was in one of the boxes.”

“I have to say a massive thank you to Daniel Raymond (Executive Box Holder) for helping us out. We spent the second half of last season in that area and it was amazing to see Nathan cheering on the team and celebrating the goals.”

From this experience Peter and his wife Kate came up with the proposal of introducing a sensory room inside the ground for Nathan and other supporters who may have similar requirements.

“We contacted the club and they helped us to develop the idea, so that there was an appropriate area for people with autism or similar difficulties to come and enjoy the match.”

“I’m really proud that Sunderland have become the first club to do this. It has been really good for Nathan and he’s really enjoyed watching the games this season. It is a fabulous facility and once again I would like to thank the support we’ve had from Chris Waters, Margaret Byrne, local schools and the supporters who have helped to make this exciting idea a reality.” Sunderland’s supporter liaison officer, Chris Waters, added: “As Supporter Liaison Officer one of my main objectives is to improve the match day experience for supporters at the Stadium of Light. Peter made me aware of Nathan’s experience and we needed to find a suitable solution for him to enjoy the game.

“Peter and Kate Shippey’s idea for a sensory room at a football stadium was unique and hadn’t been done in football before. It is fantastic to provide this as an option for families that wouldn’t have considered coming to a Premier League game in the past.”

“We have installed suitable equipment including a communication board which was donated to the room from Sunningdale School and the guests that have used the Nathan Shippey Sensory Room this season have all had a great time supporting the team. It has been a valuable addition to the stadium that will provide a lot of enjoyment for supporters in the future.”Peter and Kate have now set up The Shippey Campaign to promote the concept throughout the Premier League with the aim of getting sensory rooms installed at sports stadia across the UK. For further information about their campaign please visit http://www.theshippeycampaign.com.

Peter and Kate would like to greatly thank: Margaret Byrne, Chris Waters and all the stewards in the Black Cats Bar for the understanding and appreciation of Nathan’s difficulties, the supporters in box 7 for their hospitality and kindness; everyone who supported their campaign and James Waller (from Sunningdale School), Jan Raine and Claire Tubman (from Sunderland Autism Outreach Team) for their expert advice.

The Nathan Shippey Sensory Room is now open and available for home game this season. The sensory room provides a calming environment including appropriate sensory room equipment installed via Mike Ayre Designs for supporters to watch the game.

The room is located in the Black Cats Bar and tickets are subject to availability. If you are interested in using this sensory room this season please contact Chris Waters, Supporter Liaison Officer, chris.waters@safc.com, for further information. 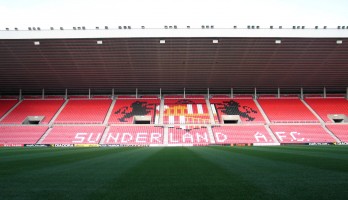