An established part of Sheffield United’s Weeks of Action activities is a pennant exchange between members of Sheffield United Disabled Supporters Association (SUDS) and opposition disabled fans, and this year members of Charlton Athletic Disabled Supporters Association (CADSA) were on hand to continue this tradition and they were joined by the Addicks manager Karl Robinson.

Before the game two special presentations were made by players Simon Moore and George Long.

Simon presented a pair of his signed gloves to Christopher Dewick. Chris, a member of SUDS, whose father is a wheelchair user, had bought the signed gloves at the SUDS anniversary dinner auction and had asked for a photo of Simon.

George Long presented a pair of his signed gloves to Jim Hall. Jim, who has Parkinsons, was at the game with his wife Sharon, who had contacted the club prior to the match to help make a rare visit to Bramall Lane for him special.

On the pitch at half-time there some of Sheffield United’s disabled footballers, involved with programmes run by the Community Foundation took part in a small game. The players were from Sheffield United Disability FC and Derek Dooley Football Academy.

Also at half-time was the annual parade of the club’s disabled fans around the pitch which was once again greeted by plenty of applause from the rest of the Bramall Lane crowd.

Sue Beeley, who leads on the inclusion work for the Blades, said: “It was a great day with support from Sheffield United Community Foundation, SUDS, United’s Inclusion Advisory Group and staff and volunteers across the club.

“A lot was going on and despite the drizzle, everyone was really positive. It was fantastic to receive lots of great feedback. Our activity supported our ethos of a family and community club.” 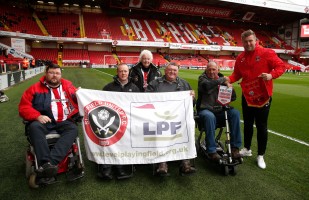