Former Blades captain Morgan was on hand, along with fellow Club stalwart Tony Currie, to cut the ribbon of the new Sheffield United Disabled Supporters (SUDS) lounge, which is located on level two of the John Street stand.

The ceremony took place before the Blades’ first home game of the new season against Chesterfield.

Dave said: “Sheffield United is a Club committed to making football accessible for all fans, and the opening of the new SUDS lounge will go some way to making accessibility easier for our disabled supporters and be a place they can meet in and socialise before games.

“Disability should not prevent any supporter from watching and supporting the team they love in style and comfort, so we’re delighted to officially open the lounge with the help and support of one of our most notable former players, Chris Morgan.” 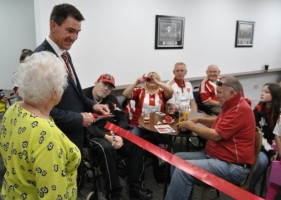