Sheffield United showed their support for this year’s Weeks of Action at their home fixture against Barnsley on 23rd April 2016, coinciding with the club’s designated FA Respect campaign game.

The day began with a certificate presentation to the young people from the Community Foundation DS Active programme with certificates being presented by club mascot Captain Blade. Before kick-off, representatives from the group carried the flags for a guard of honour as the players entered the pitch as well as displaying LPF and Respect banners.

The half time pitch parade – a regular feature of the club’s support for Weeks of Action –  saw disabled fans from both clubs join in receiving a warm reception from the Bramall Lane crowd.

Sue Beeley, Sheffield United’s Training and Development Manager said, ‘It was a fantastic day and great to team up Level Playing Field with the FA Respect campaign as so many messages are the same. It was lovely to see so many people involved on the day and the support from fans around the ground was much appreciated’.

Level Playing Field thank Sheffield United for their support of Weeks of Action. 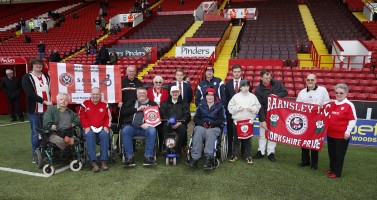