Joyce Cook OBE, Chair of Level Playing Field, argues that clubs are in breach of the Equalities Act 2010 and that the FA or Premier League must regulate in order for clubs to comply with their legal obligations. ‘We have been calling for change for over a decade. Some clubs are doing a good job, but there is still a great deal to do. Disabled fans have endured poor conditions at many top clubs for far too long’.

The inadequate state of accessible facilities has also been brought into focus in light of the Premier League announcing a new £5.136 billion TV deal for 2016-19. David Bernstein, former Chairman of the FA and current Level Playing Field President said that, ‘Disabled provision lags behind the work against other forms of discrimination and it has been very, very hard going to get the clubs to comply. The clubs don’t do it because disabled provision costs money, and they raise the issue of having old grounds. But given the money at the top of the game now, this is indefensible’.

Lord Holmes said, ‘This is the 23rd year of the Premier League yet the potential for disabled fans to access their clubs is shocking. It is possible to have high levels of inclusion and accessibility, irrespective of having old grounds, and given the huge recent TV deal, it would be scandalous if football does not do more’. He added, ‘We have had discussions with the Premier League and it is fair to say they are paying lip service to access for disabled people. As a result we are considering what steps to take. We have a number of powers and if individuals bring a case to us we would consider it within our litigation strategy’. 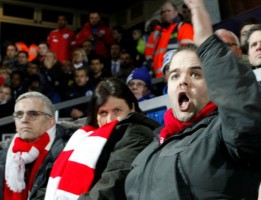