The evening started with a Question and Answer session. The panel included former Swansea striker Lee Trundle, current goalkeeper Gerhard Tremmel and Mal Pope who was Executive Director of the documentary “Jack to a King” which follows the rise of Swansea City from League 2 to the Premier League. The Q&A session was followed by a showing of the film.

The event took place in the Liberty Stadium’s Sinclair Suite and the club provided all the equipment to show the film, a signed ball as a raffle prize and covered the cost of food and drink. The event was attended by approximately 70 people. Club Disability Officer, Ian James and Club director, Huw Cooze attended the event.

Formed in 2013, Swansea DSA was established during Level Playing Field’s Working Together project.

The Level Playing Field Weeks of Action will take place from 18th April until the 3rd May. It is an annual fortnight for clubs to showcase the positive work they do in partnership with their disabled supporters and to promote access and inclusion. You can join our Thunderclap here. 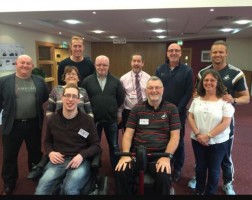