The Premier League has been reprimanded by the government and is facing calls from fans for clubs to play games behind closed doors or be deducted points if they do not meet minimum standards for disabled facilities.

A Daily Telegraph investigation revealed on Tuesday that only nine of the 20 Premier League clubs meet guidelines in the Accessible Stadia Guide for the provision of disabled facilities. A collective pledge was made in 2015 to reach that standard by August 2017, with the league subsequently giving all promoted clubs an extra two years from when they came up.

Penny Mordaunt, the minister for disabled people, work and health, described the results as “unacceptable”, with disabled fans now demanding to know what action will be taken against failing clubs. Manchester United and Chelsea are currently under threat of legal action from the Equality and Human Rights Commission but Crystal Palace, Everton, Newcastle United and Watford were part of the pledge in 2015 and remain below the recommendations for wheelchair space.

The clubs have made various improvements and all have plans in place for further change. They are adamant that cost is not the determining factor and issues ranging from the age and design of the stadiums to demand, the need for safety tests and plans to move stadium have also been highlighted. The judgment for the EHRC is whether “reasonable adjustments” are being made to ensure that discriminatory practices do not occur.

The issue has been raised in Parliament and was already the subject of attempted legislation in 2015, with the Culture, Media and Sport select committee also expressing doubt earlier this year at the Premier League’s likely willingness to discipline any of its own clubs. The league could theoretically fine any club it deems to have failed but the government is clearly now losing patience. “No more excuses, the Premier League should set the standard for the game, and it is unacceptable that almost half of the clubs are still not catering for their disabled fans,” Mordaunt told The Telegraph.

Anthony Joy, who is the chairman of the Arsenal Disabled Supporters’ Association, said: “No more warnings. We have been hearing words like ‘could’ and ‘should’ for years. The clubs have had time and a fine is not going to have any impact. Points deductions or playing matches behind closed doors is what would concentrate minds.”

Martin Emery, whose son Jordan is disabled, has grown increasingly sceptical. “A fine will not do anything,” he said. “The only thing is playing a game behind closed doors or a points deduction.”

Tony Taylor, the chairman of the charity Level Playing Field, added that it should be made “clear that these minimum standards have been in place for years and that there is no excuse as to why any club should fail to meet these basic criteria”.

Lord Holmes, the winner of nine Paralympic gold medals, is also adamant that it is a question of will. “This is entirely possible,” he said. “It would seem bizarre not to measure them against the pledge they made in 2015.”

The Premier League has pointed to “a substantial programme of work” and will publish a report in the “coming weeks”. About 1,000 wheelchair bays have been added across the league in the past two years – but the overall picture ­remains mixed.

It will be a landmark moment in the 108-year history of Old Trafford but will raise difficult questions as well as win applause.

Manchester United completed a programme of renovation this summer that will create 300 new spaces for disabled supporters and meet minimum guidelines for 277 wheelchair bays – but the crucial caveat is that the actual phasing in of these new areas will not be complete until 2020.  The process begins on Wednesday, however, in the League Cup when an extended platform on the South Stand will be in use.

Old Trafford has not met the guidelines CREDIT: GETTY IMAGES

It means more wheelchair users inside Old Trafford than ever before – 136 against the past figure of 120 – but still less than half the recommended numbers that Premier League clubs pledged to meet by August 2017. The number will also fluctuate amid trials in different competitions. United have cited safety and a desire to mitigate the upheaval of moving more than 2,000 season ticket holders.

Martin Emery, whose son Jordan is disabled, said: “It all looked so rosy but the reality in the league so far is that the number of spaces is the same as last season and they have given themselves another three years,” he said.

United are one of the clubs being examined by the Equality and Human Rights Commission and are facing the threat of legal action. This is partly understood to be due to concern at the pace of change but also a wheelchair ticketing policy that still includes a ‘rota’ system of members.

This is being phased out but 41 spaces are still taken up. There are then 57 season ticket holders with the remainder allocated to ‘official’ club members by ballot. The difficulty of getting tickets, however, is underlined for the league match against Crystal Palace when 8 per cent of the 254 applications were successful. 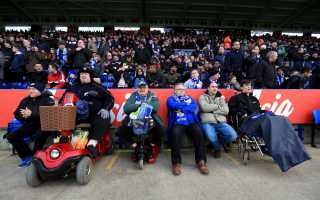