The new Conservative Government has announced that it is preparing a report into disabled access at Premier League stadiums after it was found that just three of the 20 clubs meet minimum guidelines.

A Telegraph Sport investigation also revealed on Wednesday that some of England’s richest clubs are facing the threat of losing their stadium licences and also litigation over what campaigners have called their “outrageous” failure to provide more space for wheelchair users.

“We’ve recently sought the views of fans with disabilities and will shortly be publishing these findings. A disability should not be a barrier to attending sporting events.

“The Government takes this issue extremely seriously and is already working with the Equalities and Human Rights Commission and sporting bodies to address accessibility and improve the match day experience for [disabled fans].”

Richard Faulkner, a Labour peer, is putting forward a Private Members’ Bill on the state opening of parliament next week that would make meeting the 2003 Accessible Stadia guide a mandatory part of all clubs receiving their safety licence.

The guide recommends that a minimum 0.34 per cent of tickets at larger stadiums should be available to wheelchair users. This has been accepted as a starting point by disabled supporters’ charity Level Playing Field, even though they also point out that around 1 per cent of the population uses a wheelchair and 1 per cent is the standard set by Sport England.

The Premier League believes the guide applies only to stadiums built since 2003 but the Football Task Force, of which the Premier League was a part, also recommended in 1998 that the formula should apply to all grounds.

Campaigners have also stressed that it is not just numbers that are a problem. At some grounds, wheelchair users are forced to group with fans of the opposing team and Level Playing Field has received numerous complaints of disabled supporters being abused because they are sat near rival fans through no choice of their own.

Baroness Tanni Grey-Thompson, a cross-party peer, told Telegraph Sport that this situation was “dreadful”. The Premier League has said that it is working with clubs to improve access but campaigners are losing faith in their willingness to enforce change.

“It can’t be that we just continue to allow clubs to put this into the ‘too difficult’ file,” said Lord Chris Holmes, a Conservative peer.

“It seems that the Premier League at the moment are happy to take a pick-and-mix approach to equality. It is totally unacceptable to merely select particular strands that they may see as politically more attractive or easier to deliver.

“There is a real opportunity for the Premier League to demonstrate clear, decisive leadership. If they did, I think it would be incredibly positively received. Ultimately, whichever background people come from, one of the things that makes Britain the country we are is a real and fundamental sense of fairness.”

Story and photo reproduced from the Telegraph 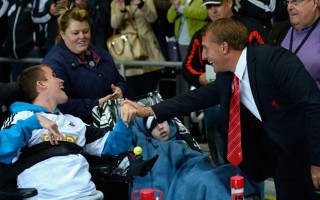