Article by Jeremy Wilson, The Telegraph

Premier League clubs have been warned that they will face formal investigations and legal action this year if they do not urgently address what the Government is now calling their “unacceptable” progress on disability access.

A new study required clubs to answer a series of key questions regarding their provision for disabled fans and, according to the Equality and Human Rights Commission, some of the responses were “appalling”.

As also revealed in a Daily Telegraph investigation last year, the EHRC found that a majority of Premier League clubs are still not providing the minimum recommended space for wheelchair users. The EHRC survey also found that just seven out of the 20 clubs are providing the larger ‘changing place’ toilet facility and that there are even seven clubs who are not meeting a Premier League requirement to publish a disability access statement to provide key information for visiting fans.

The EHRC has again cited the Equality Act 2010 which requires venues to make “reasonable adjustments” and says the failure to make those adjustments amounts to unlawful discrimination. “Clubs failing to meet the minimum requirements will be given a deadline of September 2017 to publish a clear action plan and timetable for improvement or face a statutory investigation,” said an EHRC statement. Penny Mordaunt, the Minister for Disabled People, is urging clubs to make the necessary changes. “It’s unacceptable that only seven out of 20 Premier League clubs are providing the minimum number of wheelchair spaces and changing places toilets,” she told The Telegraph. “It’s vital that the Premier League makes rapid progress to ensure every fan has equal access.”

David Isaac, the chairman of the EHRC, said: “The information we received from some clubs was of an appalling standard, with data missing and with insufficient detail. Very few clubs are doing the minimum to meet the needs of disabled supporters. The Premier League itself does not escape blame. They need to make the concerns of disabled fans a priority and start enforcing their own rule book.”

Charities also backed the call for action. Level Playing Field said that there was “no excuse” and, given the Premier League’s resources, said that it should exceed minimum requirements. Clare Lucas, activism manager for learning disability charity Mencap, added: “For too long Premier League clubs have neglected the needs of their disabled fans, many of whom are forced to be changed on toilet floors, because clubs are yet to install proper facilities. It is simply inexcusable.”

Premier League clubs set their own deadline of August 2017 to meet minimum standards set out in the Accessible Stadia guide and considerable work is now planned this summer.

Not all clubs, however, are expected to make the necessary changes before the start of next season. “Clubs are working hard to improve their facilities and rapid progress has been made,” said a Premier League statement. “The improvements undertaken are unprecedented. Given the differing ages and nature of facilities, some clubs have faced significant built environment challenges. Cost is not the determining factor.”

Reproduced from the Telegraph 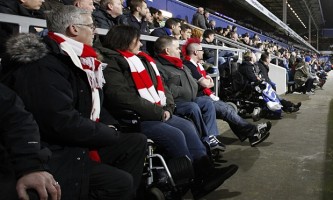