At the beginning of July 2017, a group of Tranmere Rovers supporters completed 50 hours of non-stop futsal to break the Guinness World Record for the longest futsal match in aid of the Lee Knight Foundation (LKF), the charitable arm of the Tranmere Rovers Disabled Supporters Association (TRDSA).

After a two-week wait for confirmation, it has now been ratified and the Lee Knight Foundation will appear in the Guinness Book of World Records for a second time.

Lee Knight was the founder and chair of the Tranmere Rovers Disabled Supporters Association who dedicated a lot of time and effort into trying to improve facilities for disabled supporters.

Shortly after he very sadly passed in 2015, a group of Rovers supporters successfully attempted to break the Guinness World Record for the longest five-a-side football match, racking up a total of 70 hours and 3 minutes, all in Lee’s memory and raising money for the charity set up in his name and helping to fund improvements to the disabled facilities available at Prenton Park.

This time around, with the new futsal facility at Prenton Park, it was the futsal marathon record they set about achieving and they sailed past the previous best of 40 hours, breaking the mark by a full 10 hours.

The group involved included Michael Knight (Lee’s brother and player for Tranmere Rovers Futsal), Club staff, players from Tranmere Rovers Ladies as well as a number of fans of the Club.

The record attempt doubled up as a fundraiser and it has helped to raise a great amount of money for the LKF in the process which will be used to further improve the matchday experience for disabled fans at Tranmere Rovers.

Tranmere Rovers Chairman Mark Palios said: “I would like to congratulate the effort of everyone involved in breaking this world record.

“Once again, the TRDSA and LKF have shown that they are more than willing to do whatever it takes in order to help themselves, and that self-help is something which typifies the community spirit in the Club.” 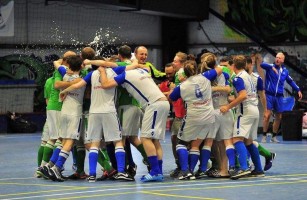