This was made possible after a group of fans set a World Record for a marathon 70 hour game of 5-a-side football in aid of the Lee Knight Foundation. The Foundation, which has charitable status, was set up after Lee passed away in March to continue Lee’s dreams of making Prenton Park a more accessible stadium for disabled fans. A viewing platform for wheelchair users was something Lee had campaigned for over the years.

Lee’s vision became reality on Saturday 12th September as the platform was officially opened before Tranmere’s National League fixture with Chester, with the newly crowned world record holders also being presented with their award on the pitch at half time.

This capped off a terrific year for the clubs commitment to access and inclusion, with Tranmere recently getting a mention in the House of Lords for the positive work they are doing to improve facilities for disabled supporters. Lord Chris Holmes of Richmond highlighted the club’s good work saying, “Tranmere Rovers is firmly, completely committed to disability access. Is it a club awash with funds? At the end of this season it was relegated from the Football League, yet its commitment to disability access and its desire to be a leader in this area holds true. Perhaps it is a new stadium; perhaps that makes it easier? Prenton Park dates back to 1912. It is hats off to Mark Palios and the leadership he shows there, demonstrating what can be done” 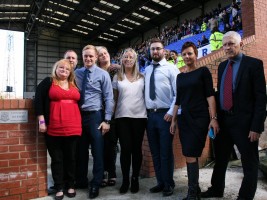