There were at least five Manchester United fans yesterday for whom, regardless of the result on the pitch, Saturday felt like an unforgettable victory.

It was in 2014 that Martin Emery was informed by United that his dream of taking his three children together to Old Trafford for a match could not be facilitated because one of his sons, Jordan, was in wheelchair and there would only be space for one adult carer to sit with him inside the ground.

The fact that United had only 120 spaces for wheelchair users – less than half the recommended minimum – also made accessing even one ticket especially difficult.

In correspondence with Emery, a United official attempted to highlight the space constraints by saying that “there are some clubs that would welcome you with open arms and possibly ask you to bring as many family members as possible, the downside is it wouldn’t be at Old Trafford, most probably Rochdale, Oldham or Stockport”.

The story was highlighted last May in The Daily Telegraph, as well as the separate revelation that United were facing the threat of legal action over alleged discriminatory practices, but the club have since responded.

A new family area of the ground was opened for wheelchair users, as well as one of only three changing facilities for disabled fans in the entire Premier League.

And Saturday was the first chance for Emery, his wife Cerys, 18-year-old Jordan, Ethan, seven, and five-year-old Zac to all sit and watch a game together.

“It might sound funny given what happened on the pitch but it was the best game I have ever been to,” Martin said. “This simply was not possible two years ago.

“Ethan and Zac have been desperate to take Jordan to Old Trafford and were literally counting the sleeps last week before we went. 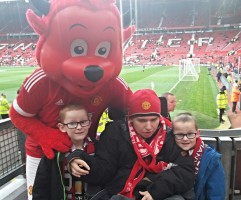