WFC Enables is the supporter group for disabled people at Watford Football Club and was originally established in March 2007 by a group of enthusiastic Watford supporters together with the club to provide a voice for disabled supporters.

Given the Club’s elevation to the Premier League and the commitment to improve stadium accessibility under the “Green Guide” by August 2017 it was decided that Enables should be re-energised and have full involvement in the changes required.

The Enables Group and Watford FC are therefore delighted to have elected a new Chairman, David Butler, who has been a Watford supporter for over 40 years.

David who is disabled himself, was just 11 years old when he picked up a heavy unexploded mortar bomb on Ivanhoe Beacon, on dropping it the explosion was heard over 7 miles away. He lost both legs and his left hand.

David has a formidable pedigree in representing disabled groups.

He took governing body of UK Motorsport and the FIA to the European Courts to force rule changes to allow disabled drivers to take part in motorsport events.  David then became the most experienced disabled racing driver in the World having driven in over 600 competitive events from World Championship Rallies to over 120 circuit races.

Watford Football Club stated they were delighted to have David on board heading up and guiding the WFC Enables Group.

“My role is to ensure that supporters with any form of disability are given equal opportunity to enjoy watching our beloved football team.

Our group provides a platform for regular dialogue with the Club relating to the stadium development and the improvements to facilities for the disabled and also creates a social forum for supporters to enjoy meeting and talking about what drives them on – Watford FC!”

Membership of WFC Enables is free and has been promoted in the Stoke match day programme and an interview with the new Chairman was broadcast on the stadium’s big screens before the match.

The Watford FC Enables Group have launched a dedicated website for home and away supporters and developed an email communication database so that Enables can send focused information to disabled supporters.

Level Playing Field has supported the re-establishment of Watford Enables as part of of our ongoing Working Together project.

Watch: David Butler speaks about the relaunch of Watford Enables 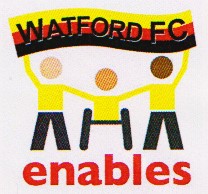