This year’s Weeks of Action campaign proved to be a huge success with a range of activities taking place around England and Wales celebrating the theme of ‘Access and Inclusion’.

Between 18th April and 3rd May, many clubs and disabled supporters associations marked this year’s campaign in style by showcasing the work that they do in partnership with their disabled supporters, as well as featuring LPF in matchday programmes and feature stories.

In addition to this, many organisations also backed this year’s Weeks of Action on social media, and our Thunderclap initiative alone reached almost 200,000 people. We also had some high profile supporters from the world of sport who got behind the campaign which contributed to making 2015 the most successful Weeks of Action to date.

Here are just a few of the activities put on to mark Weeks of Action 2015:

Level Playing Field wishes to thank everyone who contributed to making this year’s Weeks of Action such a success. 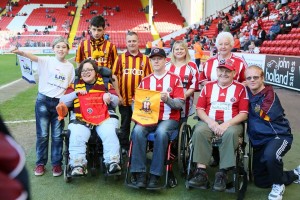