This 2017 Weeks of Action campaign has got off to a terrific start with a range of clubs and Disabled Supporters Associations hosting events and activities celebrating the ‘Game Changers’. With the first week behind us, we recap just some of the highlights so far…

To launch the campaign we introduced the joint FA & EFL film, ‘Access for all: A game-changing experience’

How Level Playing Field changed the game for disabled fans

Manchester United got the matchday celebrations underway at Old Trafford with ball assistants all kitted out in LPF #GameChangers t-shirts and the Red Devils mascot Fred the Red paraded around the stadium with an LPF pennant. Matchday staff and stewards in the accessible seating area also wore LPF t-shirts creating an interest in Weeks of Action and young disabled supporters also had an opportunity to get their photo taken with Fred the Red.

Everton launched their Weeks of Action activities by recognising the important role of the club’s Disability Access Officer (DAO). The role of DAO is now mandatory under UEFA licensing regulations and the club looked at how they can be a ‘Game Changer’ by making the matchday experience more accessible, inclusive and enjoyable for disabled fans.

These developments will prove to be a massive #GameChanger for the club’s disabled supporters.

It is not just the Premier League clubs celebrating the ‘Game Changers’ as League 2 team Exeter City took the opportunity to recognise the game changing work their DSA has done for their 10th year anniversary, in which they have raised over £20,000 to improve access and inclusion for their disabled fans.

Newport County, also a League 2, team decided to centre their activities around mental ill health with awareness initiatives encouraging fans to talk about their feelings in order to remove the stigma surrounding mental ill health. The club screened a video on matchday called ‘We wear the same shirt’ as well as setting up information points around the stadium for fans to find out more about mental ill health. This was done in partnership with the Newport County DSA.

The club also had ball assistants proudly displaying an LPF banner as the teams came out prior to kick off to show their support for Weeks of Action. (pictured below)

Swansea City DSA once again got involved in Weeks of Action with a Q&A session with special guests Tom Carroll, Angel Rangel and Lee Trundle. The event was supported by Swansea City and hosted at the club’s Liberty Stadium.

With one week and 2 matchdays left to go in the 2017 Weeks of Action, there are still plenty of  events and activities still planned to celebrate the ‘Game Changers’ and to spread a message of access and inclusion for disabled supporters. You can keep up to date with all that’s going on by following @lpftweets on Twitter and liking /lpftweets on Facebook.

Ruth Hopkins, General Manager of LPF said, “Our Weeks of Action campaign is an important event in the sporting calendar which gives us the opportunity to celebrate a positive message of access and inclusion for all. This year we are celebrating the ‘Game Changers’ who lead and inspire real change for all disabled supporters as we shine a light on the people and initiatives that can change the lives of disabled people’.

We also gained some high profile support for the campaign including Baroness Tanni Grey-Thompson and Kick it Out – See who’s supporting Weeks of Action here. 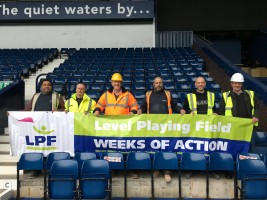