Bradford City have celebrated Weeks of Action by recognising their disabled fans as ‘Game Changers’ as well as hosting club activities to mark the 2017 campaign.

Bradford have a very active disabled supporter fanbase and the club has paid tribute to just some of those fans who go the extra mile. Here are their stories:

Luke is a passionate Bradford supporter who has celebral palsy and plays both powerchair football and rugby.

As a disabled supporter, Luke got involved with the Community Foundation volunteer group and was keen to explore the chance of a role at the club as a Steward.

After a three match trial Luke was hired permanently as a member of the matchday staff and is currently pursuing professional qualifications.

Luke is described by his co-workers as a pleasure to be around and someone who is always laughing and embracing his role and life to the full.

He is not stopping at stewarding and has future plans to participate in an accessible education course being run at the club for volunteers to complete their FA Level 1 Football coaching certificate.

Luke was also awarded the Bradford Bulls Foundation Volunteer of the Year Award for Wheelchair Rugby this season further showing his commitment and contribution to sporting activities.

We’re sure that Luke will help the Bantams ensure an accessible and inclusive matchday experience for all!

Lewis, aged 7, has celebral palsy and is a mad Bradford City fan who is well known at Valley Parade on matchdays and amongst the away travelling Bantams support.

Lewis loves getting behind the team by bangning his toy drum and waving a pitchside flag as well as joining in singing with the crowd. He even has special Bradford fittings on his wheelchair.

Bradford City Disabled Supporters Sam and Ben Robinson are season ticket holders who, along with their parents, enjoy both home and away matches and participate fully in the matchday experience at Valley Parade.

Both young men have learning disabilities but for them life is about what they can do not what they can’t. As well as being regular match going fans at Valley Parade, they both participate in a range of sports including disability football for Bradford Disability FC and will both represent Yorkshire and Humberside at the Special Olympics in Sheffield in August.

Football is not their only sport as they can be seen running regularly at Bradford Park Run, the Bradford City Run and last year Sam ran a half marathon in Bridlington in under two hours with Eccleshill Road Runners and raised over £1000 for charity.

Sam recently received recognition for his sporting efforts at Bradford Sports Awards as Young Disability Sportsperson of the Year in 2016.

In addition to highlighting just some of the disabled fans at the club and their ‘Game Changing’ stories, the club is also hosting activities including holding a FIFA 2017 tournament for disdabled fans, as well as inviting all junior disabled football players from their Community Foundation Short Breaks Project on the pitch at half time of thier 18th March home fixture. 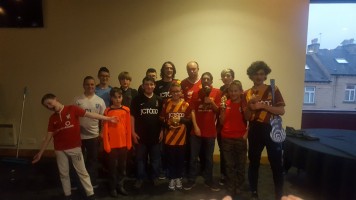