Exeter City have a very active Disabled Supporters Association that look to keep access and inclusion at the top of the agenda and raise funds to improve the accessible faciltiies and services at St James Park. Exeter City DSA (ECDSA) have been ‘Game Changers’ for the Grecians disabled fans.

The club’s Operations manager Andy Gillard had this to say about ECDSA: “Our Disabled Supporters Association provide the Club with valuable insight and assistance in making St James Park a decent and safe place which is accessible and as comfortable as possible for everyone to visit. One of the longer running Associations around, they’ve become a healthy sized group who not only enjoy the social side of football of course but also keep us on top of the regulations and supportive of all campaigns such as this, raising funds to help too”.

Since the associations’ setup in 2007 they’ve raised a massive £20,000 and this season ECDSA are celebrating their 10th Anniversary at St James Park on Tuesday 18th April as part of their Weeks of Action activities.Their first president, who held the position for 4 years is former City midfielder Bertie Cozic who made 98 appearances for the Grecians between 2006 and 2011, and was part of the team that was promoted to League One in 2009.   Bertie’s daughter Lily-Rose has Rett Syndrome and ECDSA are using their anniversary event to raise awareness of Rett Syndrome and to help raise vital funds for medical research conducted by Reverse Rett. Nick Saunders, ECDSA chairman said: “We’re always raising funds to help our football club and we wanted to use our anniversary event to give something back and what better way than supporting our original president who helped our association greatly in the early years and his daughter Lily-Rose who has Rett, so all money raised at our anniversary event will all go to Reverse Rett”.The event, which is free to attend and kicks-off at 7pm, will consist of a presentation of the achievements of ECDSA, a talk on Rett Syndrome, fun and games with a raffle and auction plus in attendance, past and present city players with a Q&A session. To register your interest in attending the above event on 18th April, please email: ecfcdsa@gmail.com 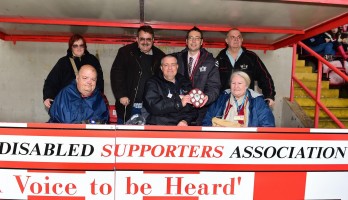