Weeks of Action: Football Family First – A game for us all to enjoy

We are delighted to feature a blog feature from Notts County FC who became the first club in the EFL to introduce sensory rooms for autistic supporters. Proving to be a great success, here is their story on how the sensory rooms have been a ‘Game Changer’ for some fans… “I never thought I’d be able to bring Tyler to a game of football. This is a game-changer for both of us.”

Trevor Hutchinson, head groundsman at NCFC. Trevor’s daughter Tyler lives in supported housing and is high on the autistic spectrum.

Football matches are intense. They’re loud, crowded, and full of passionate fans. For someone with learning disabilities, autism or severe anxiety, watching their favourites can be a struggle.

However, fans of Notts County, the oldest football league club in the world can now enjoy watching their favourite team play from the comfort of one of three sensory rooms. Notts County is proud of its roots as a ‘Family First Club’.

We are constantly seeking new ways to include everyone in the community, especially those who find attending a game more of a challenge.

To foster close links and a better understanding of the challenges facing children and adults with learning difficulties, NCFC signed up to the Autism Alliance Charter in conjunction with Autism East Midlands in January 2016.

Inspired by our discussions, the concept of our sensory rooms was born. Meadow Lane had a number of executive boxes that had not been occupied by our spectators and which at that time were full of debris.

Having immersed ourselves in the key issues and challenges, we wanted to lead the way, inspiring clubs across the country by being the first EFL club to provide specialist facilities for those who may find the stadium environment overwhelming.

Ahead of the quieter summer months, we devised a project to create and develop our own sensory rooms developing a number of previously unused executive boxes into comfortable and bespoke sensory rooms for our visitors with complex learning difficulties.

Trevor Hutchinson explains; “Ninety-nine per cent of parents wouldn’t take the chance to come to a match because they know it would be a nightmare – they think their child might fall down a stair or knock a drink out of someone’s hands. We wanted to create an opportunity for children and their carers to come and watch football in a safe and relaxing and quiet environment.”

In a ceremony which also saw the club sign the Autism Alliance charter, the rooms were officially opened ahead of the Sky Bet League Two match against Grimsby Town by Notts head groundsman Trevor Hutchinson and his daughter Tyler.

Trevor said: “It was quite emotional to be honest. To see Tyler react the way she did, and how much she joined in and enjoyed it, was brilliant. I think that was down to all the cameras – she’s quite a poser when it comes to having her picture taken!

“Even after that she remained very calm, which proves the rooms do what they say on the tin.

“It was a great day and I’m really proud of what we’ve managed to achieve.”

We are immensely proud of our sensory rooms and in particular the strong relationships that we have developed with schools, parents and carers to help those who previously were not able to do so enjoy a positive match day experience. 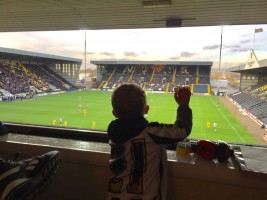