Weeks of Action: Hadley’s story – how Changing Places can be a ‘Game Changer’ for disabled fans

Here we feature a special Weeks of Action blog from Sarah Brisdion, and how the addition of Changing Places toilet facilities can be a real ‘Game Changer’ for disabled fans, including her son Hadley.

Sarah set up ‘Hadley’s Heroes’ to campaign for Changing Places to be installed at all sports stadia, this is Hadley’s story:

What’s the best thing about going to a live sporting event?

The result? The atmosphere? The stadium or venue? The people you go with? The food?

What if I told you that for my family, the most important part of any sporting event was the toilet? You’d probably think I was a little strange. Because having a toilet we can use is something most of us take for granted right? Using the loo is a mundane, everyday inconvenience, but our needs are met so we don’t have to worry about toilets nor take much notice of them.

But, what if you went to a sporting event and the venue didn’t provide customer toilets? Would you notice the lack of them? You’d probably be outraged! After all, we all need to pee! Especially when we are eating and drinking.

For hundreds of thousands of disabled people, many sports venues are essentially loo-less.

My sport obsessed, six year old son, Hadley, is one of them. He has Cerebral Palsy, is a full time wheelchair user and is incontinent due to his condition. Like so many children and adults in the UK, he needs a bench and a hoist in an accessible toilet to have his continence requirements met. Without those vital additional pieces of equipment he is faced with some pretty hideous options.

A) Lie on the toilet floor amongst other people’s bodily fluids, mud and whatever else might be there (would you lie on a toilet floor?)

B) Stay in a soiled and/or wet nappy for the entire day (he would be so sore and soaked through to his clothes!)

C) Be changed lying down in the boot of our car. In the summer we do sometimes attempt this if necessary. But during the winter months, it’s dangerously cold for him, not to mention undignified and in breach of his privacy.

Add to this the addition of being lifted dangerously from his wheelchair to the floor or other surface, we are putting him in danger (and sometimes ourselves) for all of the above options.

So D) Stay home, is usually what we have to choose.

You might think Hadley is still young, perhaps too young to really understand the indignity and danger he faces being changed on toilet floors. But let me tell you. This little boy is way too familiar with inequality. He is acutely aware that lying on a toilet floor is digusting, degrading and unfair and he is nothing short of distraught on the occasions we have to resort to it (we do sometimes. Sometimes there really just is no alternative).

Fortunately though, the world of sport is starting to realise and understand that it has a responsibility to ensure all customers/visitors are catered for, and that providing truly accessible toilets has financial benefits as well as moral ones.

This is a real game-changer for families like ours. Actually, it’s even more than that – it’s a life-changer!

Hadley has been lucky enough to visit the Emirates Stadium, to see Arsenal take on his beloved Southampton FC. Sadly, the result did not go the way he was hoping, but he had the most incredible day anyway. The joy on his face getting to watch a huge live Premiership game was wonderful. And all because he didn’t have to worry about being changed on a toilet floor during his day out. Because the Emirates Stadium has a Changing Places toilet. A facility with a bench, hoist, loo and more space for carers and in our case, our whole family.

He has also recently had a fantastic experience at Twickenham, watching his favourite team Harlequins. This was made possible as Twickenham has hired a mobile changing places toilet that sits outside the North Stand for all games. Something so simple and easy to do, but that makes such a dramatic difference to those with additional requirements attending matches.

Hadley is also looking forward to seeing his beloved Southampton FC again soon, as they take on Bournemouth at St Mary’s stadium in April. It will be his first local derby which is he so excited about. Hopefully it will be a memorable game, but he will just be happy to be there in the flesh to watch his favourite players and soak up the atmosphere. This has been made possible because Southampton listened to our pleas for these facilities and built a Changing Places. Without it, he would have been resigned to just watching televised games.

For my little boy to have a truly worry free, happy day out, watching the sports that he loves, is something that we all treasure as a family. Having access to a toilet with a bench and hoist, is essential to his wellbeing. Not just physically, but psychologically too. He feels included and valued. He doesn’t have to be anxious. He can relax. It breaks my heart just thinking about how he feels when there isn’t a toilet he can use and the damage that might be causing to his young, impressionable mind.

There are so many other places that Hadley would like to go.

You would think in 2017 that it would be possible for a disabled person to visit iconic sporting venues without being at a disadvantage. Perhaps this year is really the year that every venue becomes truly accessible. I certainly hope so. And so does Hadley.

Find out about the Hadley’s Heroes campaign here. 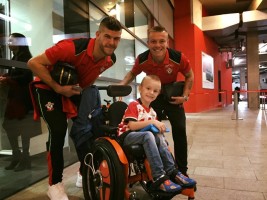