Weeks of Action: Kieran Reynolds Q & A – How can clubs be a ‘Game Changer’ for autistic fans

As part of the Level Playing Field Weeks of Action campaign we sat down with our Working Together Project Coordinator, Kieran Reynolds, to discuss his experiences as a sports fan with autism. Here Kieran discusses where he feels clubs are doing well and where he thinks they can improve to be a real ‘Game Changer’ for autistic sports fans.

Kieran has been working for Level Playing Field since 2014 as Project Coordinator for our Working Together project, where he works closely with football clubs and disabled fans to establish and support existing independent, user led Disabled Supporters Associations. Kieran has Aspergers Syndrome and is a regular match going supporter, often to be seen watching Newcastle United and live rugby matches.

Q) What were your early experiences of attending live sporting events?

A) When I was young going to football matches brought a mixture of both uncertainty and excitement. I was familiar with the concept of what it was all about having watched football on television, but what got me when I arrived at the stadium was the scale of the event. There were so many people everywhere. It was thoroughly exciting, but also a little overwhelming and it took me a little time to adapt to the unique experience of going to watch a live football match.

Q) What barriers to access and inclusion have you come across in your time watching live sport?

A) The most obvious barrier is poor signposting and clarity of information available that is unfortunately still common when planning and attending a sporting event. With kick-off times being constantly moved around making planning ahead difficult, and club websites not always having up to date and clear information, including when buying tickets, this can add to the feeling of uncertainty.

The issue of tight, narrow stadium concourse areas can also be problematic which can cause a degree of unease, as well as the increasing brightness of floodlights which can cause discomfort, make focussing difficult and occasionally lead to headaches.

Q) Do you think there has been improvement in club’s understanding and provisions for autistic supporters?

A) To an extent yes, but there is still some way to go yet. Some clubs are doing great work which I hope will encourage others to be inspired to make changes themselves. In these cases club staff and stewards are more aware of the access requirements of autistic fans, which is down to improved training and awareness. Sensory Rooms are also a great have also been a very welcome addition, and whilst not necessary for all autistic supporters, provide a great environment for those who need it, particularly young fans making their first visits to busy, loud sports stadia.

Q) What can clubs and venues do to make sports stadia fully accessible and inclusive for autistic sports supporters?

A) There needs to be a variety of options as no two autistic people are the same. Like all fans, there needs to be choice and having sensory rooms and other areas with more space within the stadium.

Clubs could really look at the signposting and clarity of information available on their websites and on matchdays, improvement in this area would make going to matches far easier and lessen the uncertainty that it can cause when planning and attending a live game.

More training for club staff and stewards is also essential as this makes a big difference come matchday. This could also extend to employing autistic people, as well as creating awareness amongst all supporters – the more understanding people have of autism the better.

Q) If you could give any advice to an autistic person who hasn’t yet attended a live sporting event and is cautious of doing so what would you say?

A) The key thing is planning ahead and doing as much research beforehand as possible so there is less uncertainty when you arrive at the stadium. Some grounds have an online service which allows you to see the view from your seat so you can familiarise yourself with where you will be sitting and if you live close to the stadium you will be visiting it’s always worth paying a visit on a non-matchday to familiarise with the surrounding area so you know where you’re going come matchday. When it comes to the day of the game, make sure you get to the stadium early! 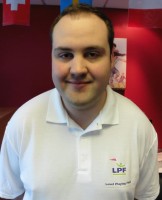