Weeks of Action: Peter’s story – The experience of a colour blind supporter

Here we feature a special Weeks of Action blog from Peter Adcock, a lifelong Southampton supporter who discusses his experience of following football as a colour blind fan, and his recent visit to Wembley Stadium for the EFL Cup Final.

I’m one of the 12% of males who are red/green colour blind to some extent.  It’s never been a huge problem for me, I’ve made mistakes sure, some of my past wardrobe choices have left a bit to be desired for instance and art has never been my strong point.  Apart from some (mostly good natured) ribbing, life is fine.

When I was younger, life was much simpler, or so it seemed. Football certainly was, your team played at 3pm on a Saturday and maybe midweek, referees dressed in black and goalies in green. Team kit was either one colour or stripes (Southampton) or more exotic halves (Blackburn) or quarters (Bristol Rovers), that was that. Simple. In fact, because of the state of the pitches back then, both teams mostly ended up a shade of muddy brown anyway.

Then came two things, which made football less simple and at times downright confusing for us 12% – new fabrics and marketing and “branding”.

Why the change? Team kit was hijacked by the marketers and branders who realised that, with the new fabrics, all sorts of crazy designs and colours could be created – usually every one or two seasons at huge costs to any supporters who felt the need to wear a plastic shirt covered in adverts.

Then the same people decided to market and brand match balls, balls were white (or orange when teams played in snow – really, they used to!) and occasionally yellow.

It’s been a long standing problem for me when trying to watch Wales vs Ireland in the 6 nations i.e. red vs green, but rugby is easier as players remain behind the ball.

The use of black or green (for example) for second kit in football has been a huge problem especially black vs red or red vs green or black and white stripes vs red and white stripes. The advent of big, moving advertising hoardings has not helped.

I can’t begin to describe how the excitement builds from winning the semi-final to the realisation that you have a ticket to planning the day then the day itself. Obviously you must buy some of the cup final souvenir merchandise to add to your collection.

This year my excitement was tempered with some disappointment, Southampton were drawn to wear change strip vs Manchester United’s familiar red shirts. All well and good in 1976, 1979, 1992 (even though it was a kit I’d rather forget, it was blue which was good!) and 2003 but for some reason the mighty Saints had decided black was a sensible change strip. Black vs black then for me. This was in spite of pressure being brought to bear last season as the change strip was an inappropriate green but a change of “kit partner” seemed to wipe out the conversation we had about which colours are better for the 12%.

Wembley has a sell-out crowd of some 90,000 souls, I have no idea of the male:female spilt, even assuming 50:50 (which I’m certain it was not) then 5,400 people minimum would struggle to follow black vs red not including the 4 players and officials who may be also colour blind.

Then, something wonderful happened. When Southampton played away at Bournemouth, the FA insisted that Saints played in a “one off” white strip (Bournemouth play in black and red stripes), the game was televised so I could watch and enjoy.

I don’t really know the reason but the local paper – the Echo – broke the news that the players have requested that they play in white at Wembley i.e. the “one off” became “two off”. The reason? That it’s “easier to see other players” – surprise, surprise! Some grumbling amongst the fans as the club were not going to sell the shirts, me, I was pleased and have never forked out for a plastic shirt, I have a mis-shapen old cotton one!

The day dawned, I was coerced into taking the kids so that they could go and have fun in London while I went through the emotions. The day didn’t start well.  “Dad, do you have to wear that shirt, do we need all those scarves draped around the car?” etc. It’s that or pay to get yourselves to London!

I joined the throng at Wembley, arrived to meet my nephew to find that the club had provided another scarf for all supporters to wear, wave around, generally mistreat and annoy offspring, so I could now wear two! The game was fantastic – easy to see the whites of the Saints and Man Utd’s dark strip stood out against the pitch.

From having a perfectly good goal disallowed, to then going two goals down, to fighting back to 2 – 2, getting ready for extra time when…disaster – United scored a 3rd, against the run of play it has to be said. We politely watched the cup presentation to the non-playing Wayne Rooney and the rest of the United team and loudly applauded the gallant losers.

In the end I enjoyed everything about the match, especially being able to easily follow the action. Why the late change of strip? I’m not sure but I remain hopeful that the powers that be are becoming more aware of the requirements of all supporters and we will see an end to marketing and branding with no thought to whether or not it enhances the game.

Oh – the ball was white and I now need extra space for my two new scarves.

This simulation shows what a colour blind supporter may see at a match. It is important colour blindness is recognised and considered by decision makers within sport in relation to kits and kit combinations, the matchball, signage and wayfinding and even on match tickets…

Could you find your way to your seat with the image on the right?

Watch: Former Iceland Head Coach Lars Lagerbäck talks about the challenges that he faces as a coach with colour blindness, and about what can be done to make football more accessible for colour blind people (UEFA.org) 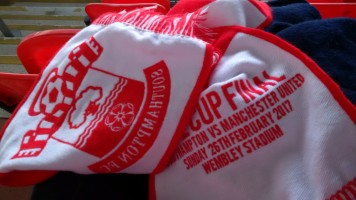