Preston North End have highlighted the story of disabled fan Albert Halliwell as part of the club’s Weeks of Action celebrations.

Albert is 75 years old and has been a PNE fan for 67 years and is a season ticket holder at Deepdale having followed the club far and wide throughout his life.

After promoting online and social media which was shared widely by PNE fans, the club were able to find the perfect fit for the role of companion. Melanie Norris had the experience required and soon became a #GameChanger for Albert as his companion.Speaking about her new found role, she said: “I saw the advert on Facebook, screenshotted it to my mates and asked them whether they thought I should go for it and they agreed that it was perfect for me,” said Mel who assisted Albert for the first time at the Birmingham City game last month. “It was such a heart warming story and it was quite nice of the club to post something out to help Albert. I’m a District Nurse in Blackpool so that’s probably why I wanted to help Albert so much, his quality of life was at stake so something needed to be done.” Mel, who is also a season ticket holder has seen her matchday traditions slightly change since taking up the mantle as Albert’s matchday companion but insists she wouldn’t have it any other way. She added: “I use to sit in the Invincibles Stand with my dad and have a pint on a matchday so it’s changed slightly, but it makes me feel good about myself as I’m helping Albert and making sure he can come to the games. If somebody told me that I couldn’t come to the games anymore I’d be distraught! Albert spoke about shis new found companion saying: “I suffered a stroke 20-years-ago so coming to games has always been a struggle but it’s nice to be able to still go to the games and that’s all thanks to Mel – she’s been very good to me!” PNE’s Supporter and Disability Liaison Officer Hannah Woodburn said: “Mel’s willingness to go the extra mile for a fellow PNE fan typifies our supporters and what they are all about. “We were over-whelmed by how prepared our fans were in helping us find a suitable carer for Albert when we shared his story, and we’ve certainly found that in Mel.”

LPF are delighted that Mel has proven to be such a ‘Game Changer’ for Albert!

You can read Albert’s story in full here.

The club has also used Weeks of Action to introduce Radar Locks to all accessible toilets at Deepdale. This was following recommendations made in the club’s recent Access Audit carried out by Level Playing Field and will mean a more inclusive and accessible matchday experience for supporters who use accessible toilet facilities.

This will be in place for the Lilywhites next home game against Reading. More information here. 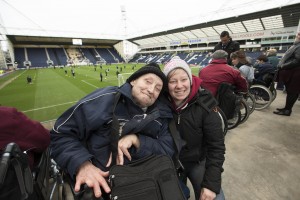