Weeks of Action Regional snapshot – What’s been happening down South

AFC Bournemouth celebrated this year’s Weeks of Action in a number of ways. They had flag bearers from Longfleet Youth Lion’s DSActive programme forming part of a guard of honour. They have improved their facilities over the summer with an increased number of raised viewing platforms, the introduction of a Changing Places toilet and a thorough review of signage. To read the full story follow the link to their website here.

Arsenal celebrated the variety of disability football programmes run through their Arsenal for Everyone initiative. Some participants from their adult learning disability programme got to meet some of the players after the Women’s Continental Cup Final. The introduction of more wheelchair user spaces and of a sensory room are just some of Arsenal’s ongoing efforts to be as inclusive club as possible. You can read more here.

Chelsea FC and Chelsea FC Foundation kindly supported us via social media and shared a picture of Cesar Azpilicueta wearing an LPF t-shirt.

Crystal Palace supported our Weeks of Action on 31st March at their match against Liverpool and invited our Projects Coordinator Kieran Reynolds to attend, to whom they presented the Crystal Palace Equality Award ahead of the match. You can read all about what they got up to on the day here.

Southampton supported us via social media and hold an annual accessibility open day at the stadium in August; so keep an eye out for that.

Tottenham Hotspur supported us via social media and promoted their planned accessible facilities to coincide with Weeks of Action.  You can read more here.

Fulham promoted Weeks of Action in their matchday programme.

Ipswich Town planned to display a banner above their accessible section in the stadium on their match against Sheffield United on 10th March.

Norwich City posted a story on their website which you can read here.

QPR launched their Disabled Supporters Association (DSA) and invited LPF staff, Project Coordinator Kieran Reynolds and Chief Executive Owain Davies, along to attend. Minister for Sport and Civil Society Tracey Crouch also attended and helped to display the banner at half time. Interviews with Kieran Reynolds and with DSA chair Julie Hampton were videoed on the day and can be seen here.

AFC Wimbledon celebrated Weeks of Action on 7th April 2018 in their match against Scunthorpe.  Level Playing Field’s Project Coordinator Kieran Reynolds and Campaign Coordinator Helen Pownall were invited to attend on the day. The DSA were handing out Level Playing Field wristbands on entry. Paul Raymond, chair of the DSA and Mandy Bynon who is the club’s DLO worked well together to make the day a success. A Level Playing Field Weeks of Action banner was displayed near one of the goals, Disabled supporters from High Path Community Centre were invited onto the pitch at half time and their very own Warren Palmer scored a goal with fans and Hayden cheering him on. You can read the full story here.

Bristol Rovers FC and Bristol Rovers DSA supported Weeks of Action 2018 with a number of events and activities. You can read the full story here.

MK Dons are hosting their Ability Counts Big Day on Saturday 14th April and as part of their celebration of our Weeks of Action are offering behind the scenes tours to disabled supporters on Thursday 12th April. You can find out details here.

Northampton Town ran an article about their work with disability football that you can read in full here.

Portsmouth did ‘a day in the life of’ Pompey DSA member Cath Absolom as well as a slot on their local radio station ‘Football Hour’ on 15th March. To read the full story of Cath’s matchday you can visit their website here. They topped this off with a news story on 30th March that you can read here and as part of the celebrations the DSA were treated to a tour of the training grounds which included a chance to meet the players. The DSA presented the club with cakes to celebrate it’s 120th birthday as seen here.

Crawley Town celebrated Weeks of Action by publishing an interview with Crawley DSA members in their programme and on their website. You can read the interview here.

Exeter City published an article in the matchday programme and on website to promote the club and DSA. You can read this here.

Forest Green Rovers got involved in a variety of ways. They published an article in their matchday programme and partnered with local charities Allsorts and Gloucestershire Deaf Association (GDA) attend. Recent Oscar winner Maisie Sly was a mascot at the match.

Luton Town and Luton Town DSA used Weeks of Action to showcase their Audio Descriptive Commentary service. They also released a new a information film, providing details of access to the stadium for disabled supporters. You can read more here.

Yeovil Town organised a number of their activities with their Disabled Supporters Association. The DSA manned a stall, which demonstrated all activities and facilities that they provide. The players wore LPF t-shirts during their warmup and a LPF banner was held by both players and DSA members on the pitch at half-time. You can read this here.  DSA Committee member David Munn also took the time to share his experiences with us and you can read his blog here. 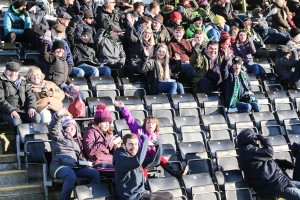