The WBA players also got involved; all the players warmed up in Level Playing Field t-shirts showing their support for this important campaign. As a club WBA have been applauded for their great work in meeting the Premier League pledge and providing greater facilities and experiences for disabled fans (related news story here).

Owain Davies, LPF Chief Executive was invited to the WBA game and had the following to say; “The club show a strong commitment and passion for access and inclusion, not only in supporting this year’s Weeks of Action campaign but also in the incredible work the Albion Foundation carry out on a daily basis. It was great to see members of both WBA and Swansea City pan-disability junior teams take part in a match at Half Time to cap off their matchday.’

Level Playing Field would like to thank the whole club for their support with this year’s Weeks of Action. 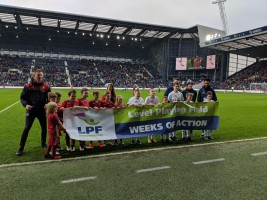