Working Together: Arsenal DSA to relaunch

The relaunch of ADSA is being led by Arsenal Season Ticket holders, Anne Hyde and Anthony Joy and a steering group is now in place. The group are now actively seeking to attract disabled fans and other relevant stakeholders who are interested in joining.

ADSA will be the twelfth DSA to be established during Level Playing Fields Working Together project. ADSA has the full support of Arsenal Football club and they were promoted at the Disabled Supporters Christmas Social which was attended by former player, Sol Campbell.

Anne Hyde said “I am delighted and honoured to be part of ADSA and with a newly formed steering group, we will work hard to meet our aims and objectives.  We will aim to enhance match day experiences for all supporters and to establish links with other Disability Supporters Associations as well as to enable its members to share a common interest in Arsenal Football Club. Without the assistance of Alun Francis (Disability Liaison Officer, Arsenal FC), Mark Brindle (Supporters Club Liaison Officer, Arsenal FC) and Kieran Reynolds (Level Playing Field) re-establishing the association would not have been possible.”

If you are interested in joining the ADSA you can request a membership form from Anne by emailing arsenaldsa@btinternet.com. Membership is free. 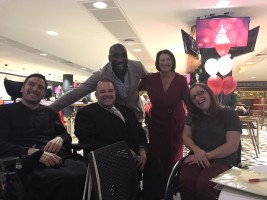