Working Together: LPF to support establishment of Aston Villa DSA

The club invited a group of fans to an event where a group of supporters outlined their plan to establish a new DSA. Kieran also spoke to attendees outlining the benefits of establishing a DSA and the support LPF can offer.

The presentation was positively received by the fans present. Lifelong Aston Villa supporter, Dale Carter was elected Chair of the steering group which will be tasked with setting up the new DSA.

The new DSA is being established as part of Level Playing Field’s Working Together project.

An Aston Villa DSA Membership form can be downloaded here.

Working Together Project Coordinator Kieran Reynolds said: “I would like to thank Aston Villa FC and for organising the event. We were delighted by the number of people attending and that the proposal was well received by the fans present. We believe that the establishment of a DSA is positive news for all disabled fans of Aston Villa Football Club.” 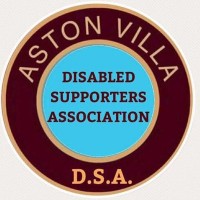