The aim of the Level Playing Field (LPF) Working Together project is to improve the relationship, awareness and cooperation between disabled fans, clubs and non-disabled fans.

One of the ways this has been done is by supporting clubs and disabled fans to help them form pan-disability user-led Disabled Supporters Associations (DSAs).

Why establish a DSA?

A DSA is  pan–disabled representative consultation group which will help to forge better relationships and ongoing communication between clubs and their disabled fans. Benefits of establishing a DSA include:

How can Level Playing Field help?

Working Together is led by our Projects Coordinator, Kieran Reynolds, who offers ongoing support and guidance for new and existing DSA committees. Support offered includes:

Projects Coordinator Kieran Reynolds said, “It is clear that where DSAs exist there is almost always a better relationship between the football club and their disabled fans. This has been shown by the success of DSAs across England and Wales. We have established fifteen DSAs during the project and we are looking forward to continuing to work with clubs and fans to establish more DSAs in the future.”

One notable recent success was the establishment of Bristol Rovers DSA during the 2016/2017 season. LPF attended a meeting in December 2016 which was attended by the stadium safety officer and two representatives from Bristol Rovers Supporters club. The supporters club then agreed to support the establishment of a DSA and an open meeting for all disabled supporters took place in April 2017 where LPF presented about the benefits of a DSA. A steering group was formed and the DSA officially launched in August 2017.

Bristol Rovers DSA have a strong relationship with the club and have been consulted on a number of plans to improve accessible facilities at the Memorial Ground. They will also be consulted on plans for a new stadium in the near future. The DSA ran a stall at the club open day and have formed links with other DSAs. They attended the South West Forum at Yeovil in 2017 and will host in 2018. They have also contributed to the South West forum newsletter.

Zoe Kirbky Chair of Bristol Rovers said, “When we formed in May 2017, Level Playing Field was there from day one to provide valuable information and support. I have had many conversations and have exchanged plenty of emails with their team, especially Kieran Reynolds – Coordinator of their Working Together project. Having such guidance has meant we have been able to set up the DSA efficiently and have put in place best practices and procedures from the start. Without that help, we wouldn’t have got things up and running in the short time that we did, and ultimately that has allowed us to work on the issues that matter most far sooner”.

If you would like to learn more about the Working Together project or would like to get involved please email us at info@levelplayingfield.org.uk, call 020 8621 2403 or click here. 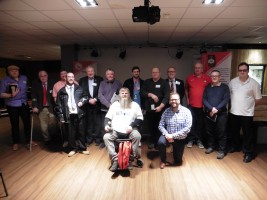